Skip the movie. Read the book: The Da Vinci Code

The Bible was written by man over thousands of years, more than 2,000 years ago. Is it possible it could’ve been changed or altered, important sections lost or rewritten over the centuries? How do we know we’re getting the entire, original story? Who is to say that the Bible as we know it today includes all the accounts that were originally written? And how do we know the stories that do survive haven’t had parts omitted or censored? Is our belief in God based on false doctrine?

Everyone loves a conspiracy, and what better conspiracy to investigate than one that involves the whole world. There are so many historical citations that this may as well be a history textbook. Not many stories can get away with that, but the information is so interesting you will believe every word of it. …because it makes sense. 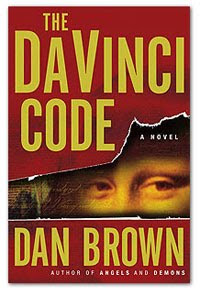 But how much of The Da Vinci Code is fiction and how much is fact? If you buy into the conspiracy, Robert Langdon’s ability to find hidden symbols in everyday life reinforces the elaborate lies we’ve been told. The lies about sexuality, the female gender, male superiority, and the real origins of the pentagram and the goat (they weren’t always Satanic symbols, but thanks to the Church they have become so).

If you don’t buy into the conspiracy, it gets far-fetched and annoying. Everything is a symbol to Robert Langdon. Maybe he'd like to look for a goddess symbol on a box of cereal. Isn’t it possible that sometimes a triangle is just a triangle? It doesn't always have to be an encrypted symbol for the womb.

It's a mind-blowing concept, but only if you allow yourself to believe this could be possible, and accept that the story is just an excuse to present the concept. Really, this book is not suspenseful, nor does it tell a particularly well-executed or original story. There is no code hidden in the works of Da Vinci that Langdon must decipher to learn the deep, dark secret. The characters are following a trail of clues laid out by the man who was murdered in the first chapter. And at the end of the trail is something just a wee bit disappointing. Langdon doesn’t learn or discover anything along the way. He already knows about this conspiracy, and we discover it because he lectures it to the reader. It would’ve been better if he discovered it as he solved the clues, making the conspiracy part of the story instead of the excuse for it.

The Da Vinci Code is a lecture, but it’s interesting enough as is because the idea behind it is so mind-blowing. The concept triumphs over the story. There’s nothing wrong with that, but hopefully Da Vinci Code 2 won’t rely on it.

The film adaptation of the popular book suffers from a unique crisis: it follows the book too closely.

I'm the first one to complain when a movie strays too far from its source material, but this time staying true to the source is what kills the movie. 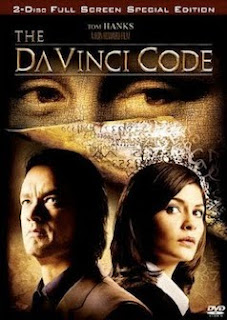 Talk, talk, talk, explanation, lecture… When presenting ideas, books can get away with this. Movies rarely can.

I read one reviewer call the Da Vinci Code an action thriller, but without the action and without the thrill. That's the best summary I can think of, but this isn't the movie's fault. It's how the book reads.

Dan Brown's novel is an elaborate excuse to present the idea that the Bible has been rewritten to cover something up, and the movie tries to present the idea in the same way. It doesn't work. It's not cinematic. It comes across as a college lecture on symbology.

Teabing cries out in glee that he's on a Grail quest! Well, this isn't an Indiana Jones-style quest for the Holy Grail. There's nothing epic about it. The story is uninteresting.

Nobody listened to this idea when Baigent, Leigh and Lincoln published "Holy Blood, Holy Grail" in 1982. When Dan Brown presented it in novel form, suddenly it's the most popular book of 2003. If anything it's a shining example of the power of fiction to convey serious concepts to a mass audience. Movies need to be cinematic to pull this off. Books don't.