Sometimes there just isn't much to say about a book/movie comparison. So here's an abbreviated seek the original of:

This was what inspired me to start doing Seek the Original, but my first stab at it was terrible. Try again.

The book is one hell of a trip. What if artificial organs could be repossessed after someone falls behind on their payments, leaving the people dead on the floor? This book is the stream of consciousness story of a bio-repo man who rose to the top of the bio-repossession business, only to fall victim to the same business.

It outlines his time in the military, his marriages, various repossession jobs, the works! The first half of the book is almost entirely back story, and it’s so random. One section our main character is talking about his second ex-wife; the next paragraph jumps back in time to his years in the military. The entire book reads this way; random jumps back and forth in time. Complete stream of consciousness. I’ll admit the first half of the book is a little hard to get through because the sheer amount of back story is overwhelming and I kinda wanted something to happen. It was easy to put down when the main character was just rambling on about his past, but soon enough, something did happen, and with a little front story to balance the back story, the book picked up the pace.

I love the nonchalant way he views cutting people up, taking their liver, spleen, lungs or heart and leaving them dead…with a yellow repossession receipt on the body. I especially like the passage when he describes a time when he repossessed an organ, only to find out that the guy actually did make the payment; a screwup with the paperwork resulted in a false repossession. It’s so ordinary to this guy that it’s funny. Eric Garcia has this sense of humor, and it’s so appropriate for a story like this.

The last half of the book kept me turning the pages; I had to know how the hell this situation could possibility wrap up. It’s a good ending, too. A much better ending than the movie adaptation delivered. 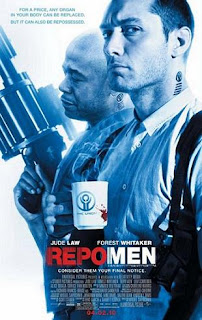 The movie pissed me off!

It ditches the back story, the main character's life, and trades it for gore. It turns the repossession of artificial organs from black comedy to slaughterhouse action. Instead of repo men, our main characters come across as hunters tracking down prey! There's a little of that in the book, but the movie takes it to the exclusion of everything else!

Our main character's love life is demoted from a series of exes to just one nagging bitch who whines about how she wishes her husband had a better job. Yeah, he's providing for her and the kid, and all she can do is bitch about it. Gruesome as his job is, she really has no reason to complain about it, but complain she does, and it doesn't make her into a sympathetic person. The wives in the book are much more interesting. They're real people. The movie turns her into "the nagging wife."

And then the ending. The book has a logical, meaningful conclusion that gives our unnamed protagonist a new beginning. The movie has a trick ending. The entire third act never happens. The protagonist is brain dead and doomed to live the rest of his life as a vegetable. It's like Dorothy waking up and it's all a dream. Instead of feeling like a shocking plot development, it just felt like the movie flipped me off right before the credits rolled.

The book is all about the main character's history. The idea is he thinks he could die at any moment, and he wants to leave something behind, so he writes his memoirs, reliving his past, putting his life in perspective trying to figure out how he got here. He has lived an interesting life. He's a fascinating person to get to know as he looks back on everything he's been through.

The movie turns this character study into a gory, shallow action flick. Hollywood has not been kind to Garcia's books. Not at all.
Labels: Eric Garcia repo men seek the original