Seek the Original (abbreviated): A Boy and His Dog

Sometimes there just isn't much to say about a book/movie comparison. So here's an abbreviated seek the original of:

When I was a kid, my parents and I often went to the video store to rent movies. VHS tapes. The good ol' days of be kind, please rewind and all that. I remember seeing a certain box on the shelf all the time. A certain box with a certain image that captivated me and stuck with me all these years. 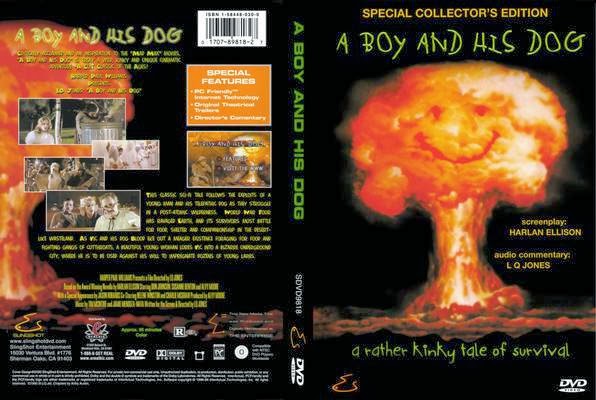 That sight of the mushroom cloud with a smilie face on it. It fascinated me. I would see it in other video stores, other rental places, and I always wondered what it was.

Then I forgot about it until my roommate and I were poking around on Netflix and there it was again! First time I'd seen it in many years. Now was my chance to watch it, so I did, having no idea what it was about or what I was getting into.

A strange post-apocalyptic world where society is dead and people are wandering the wasteland that is planet Earth trying to survive. Some dogs were modified for wartime purposes to be telepathic, and now they can communicate with people. Vic is a loner in this wasteland, and Blood is his telepathic dog. He finds the dog food, and the dog sniffs out pussy for him.

Women are apparently very rare these days, and the only way for him to get laid is to rape whatever girl he finds before someone else rapes her.

The woman he and Blood are trailing lures Vic into an underground settlement where people have tried to revive society in their image. They need new genetic material, and sent one of their girls up to the surface to lure a man down to them so they can harvest his sperm and save their society.

But the girl, Quilla June, decides she actually loves Vic and is tired of living underground. So they fight their way back up to the surface. They find Blood, weak and starving. Vic has to choose: his dog, or the girl. He makes the obvious choice. He chooses the dog.

The dog eats the girl. It blew me away. It was so weird and I did not see it coming. Wow! That's dark! The movie is bizarre and I wouldn't watch it again, but it wasn't too bad either.

Then I read the story by Harlan Ellison, and to my surprise the movie follows the short story almost to the letter. The key differences have more to do with budget and what they could pull off for special effects.

The story takes place in the bombed-out ruins of a city. The movie takes place in a desert. The story works much better in a city because it comes across as a war-damaged reality. The desert implies the world has gone to waste, but without ruins, the effect isn't as good. Hard to imagine how these people live in the desert with no food or water. In a ruined city, there would at least be some source of water, canned goods, guns and ammo for the people. Plus, they'd have shelter. The desert doesn't make this look very post-apocalyptic. Just a desert.

In the movie, the people in the underground city wear face paint for some reason, and the marching band music is constant and annoying. The story doesn't mention any of this, but it does fill our heads with narrative details of perfect 1950's-TV-sitcom life. This is the ideal society these people sought to create in the wake of a war that destroyed it. It bores Vic out of his mind with how fake it is. The movie doesn't establish who these people are, why they're down here, or why they live this way. It still works, but it's also very strange letting the imagery stand on its own.

The movie simply has the townspeople harvesting Vic's sperm by force. In the story, he was brought down there to have sex with the women. I think the reason for the change is obvious: to move things along faster. The story has Vic staying with them for over a week, getting acquainted with the people and how they live before they let him into their wives' bedrooms. The movie wanted to keep the pace up.

I still don't understand why Quilla June would suddenly be on Vic's side. In both versions of the story, he rapes her. He hunts her, corners her and rapes her. He's filthy, hungry, vulgar... Why does she decide to go with him and live in the lawless world above where she can look forward to getting shot while starving in the searing heat of the desert? What does she have against her safe life underground? I don't get her. I really don't. I suppose you could write her off as young and attracted to danger, but still! Stupid girl! [edit: ...or perhaps dumb author who is terrible at writing women?]

And the ending. The story has a much quieter ending. Yes, the dog eats the girl, but the girl asks him if he knows what it feels like to be in love. If he knows what love is, out here in this loveless world. He figures out the answer. He does feel love. He loves his dog.

The movie ditches the subtle ending and makes it a punch line. It punched me in the gut, but it comes out of nowhere! They eat the girl! What?! Where did that come from?! The original story has the better ending because it does not come out of nowhere. It's a weird way to discover what love is, and it could have been done in the movie. Instead it just settles for a punch line.