61.1% of everything Hollywood does is adapted from a book, or short story, or comic. Never settle for an adaptation. Seek the original! 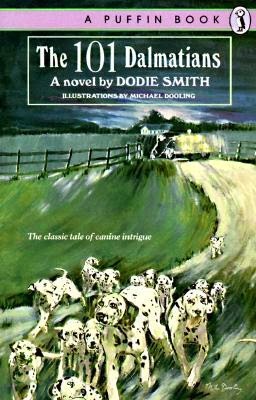 The 101 Dalmatians
by Dodie Smith

A very plain Englishman named Mr. Dearly meets a very plain Englishwoman and becomes Mrs. Dearly. They are both quite rich, so they are able to afford a house servant of their own as well as a house in London.

Mr. and Mrs. Dearly both have Dalmatians, Pongo and Missis, who are also very plain and English. They have fifteen puppies, and all are very happy (if not plain).

Then they meet their neighbor, who happens to be an old schoolmate of Mrs. Dearly's, Cruella de Vil. This dark-skinned lady adds a bit of unwelcome variety to the plain, English world of Mr. and Mrs. Dearly. (No, really, the book describes her as having dark skin. Let's hear it for subtle 1950's racism!) Cruella is crass, flamboyant, and she's in love with fur coats, which is why she married a furrier.

When the puppies are kidnapped, it's so obvious what happened to them a child would guess it, but of course the Dearlys are clueless. Cruella wants Dalmatian fur coats, and it's up to Pongo and Missis to bring their puppies back, with the help of every canine in England. Turns out they're in a place called Hell Hall, Cruella's ancestral home, far out in the country.

What follows is Pongo's and Missis's plain journey across a plain landscape meeting plain characters and thwarting plain dangers and never losing their cool, English plainness and did I mention everything in this book is so PLAIN?!

This really is written for children, but man, none of these characters has any personality. Mr. Dearly huddled under the cabinet, bottle-feeding the puppies with one hand and answering the telephone with the other is amusing, but it's all so vanilla, so the book is very easy to put down.

I do like the ending. Once Pongo and Missis get the puppies back to London, they give Cruella hers by finding her fur coat collection and tearing it to pieces. Then the Dearlys buy Hell Hall and turn it into a Dalmatian farm. Nice touch.

There's nothing wrong with the book, but I found it too plain, too passive with too many dialogue adverbs, too much authorial interjection and no real sense anyone was in danger. Cruella is not in the story enough to be a threatening presence, and everyone else who is in it adds nothing but more plainness. Disney's version is actually an improvement. 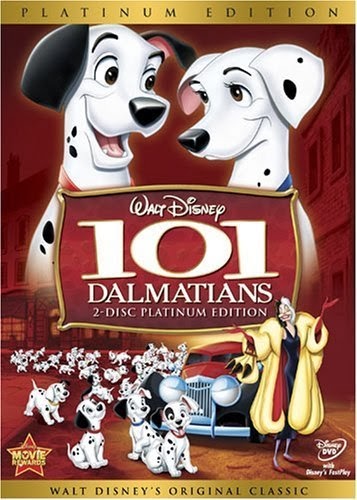 It eliminates a few extraneous characters for simplicity's sake though. For example, in the book, Missis is unable to nurse fifteen puppies by herself, so Mrs. Dearly finds a Dalmatian who lost her litter and is still giving milk. Perdita is her name, which is the name given to Pongo's wife in the movie. The wet-nurse character is not in the movie, but this actually keeps things simple and is a welcome change.

The whole story of how Roger and Anita get together is not told in the book. Well, it's told, but it's simply narrated. Mr. Dearly solved the government's debt problem and his reward is that he doesn't have to pay income taxes, so now he has money, and he meets his wife and they get married. That's it. Nothing much of it.

The movie, however, shows how Pongo manipulates Roger to hook him up with Anita, getting him to the park, wrapping his leash around them, pulling them together and pushing them into the lake. It forces them to share a laugh and start a relationship. It's fun. Roger and Anita have personality, some history, some reason to care about them. The book does none of this, relying on their plainness to help us understand them... Or something.

In the book, Cruella de Vil is barely in the story. She does not show up when the puppies are born. We do not see her chasing the puppies after they escape Hell Hall. We do not get to see how having her fur coats destroyed affects her. We're told what happens to her, but it's so passive it barely registers as just desserts.

The movie, however, turns the character of Cruella into one of the most beloved villains in film history! She has more presence, and she is a more active player in the story. When Pongo and Perdita lead the puppies home, the audience sees it both from their point of view, and from Cruella's. She is on their tail the whole time, pursuing them, stalking them, keeping the pressure on. This is not done in the book, but it should have been, if only to show more of the villain and keep the dogs in real danger from start to finish.

Maybe I'm being too hard on a children's book, but the movie took this idea so much farther than the book ever did. The action is better, the characters have personality, Cruella takes charge and is a more constant threat on the journey home. This is most apparent in the truck sequence.

Both the book and movie have the dogs finding a moving truck and taking refuge from Cruella in it. In the book, Cruella just drives by and never even sees the puppies there, then the truck takes them home and that's it. In the movie, she does see the puppies, and chases the truck, trying to run it off the road. It's a huge improvement.

I actually like the Disney movie better than the book. The characters have more personality, the villain is more active and the dogs are in more danger. It's not one of Disney's strongest films, but it's still a pretty good watch. Kudos to Dodie Smith for writing it, but this time the filmmakers took it the couple extra steps needed to make it memorable.

It's not an adaptation of the book. Really, this movie is all about Glenn Close's portrayal of Cruella de Vil. I get the feeling someone at Disney saw her on stage, thought she resembled the animated character and pitched the idea to the studio to cast her as a live action Cruella.

The story is built around her character as a big shot fashion designer. Anita is one of her employees. Roger is a computer game designer (developing the movie tie-in game).

The puppies are kidnapped, the humans are helpless, so the animals break out and go to the rescue. The rest of the film is about the animals setting traps to torture the villains in comedic ways while the puppies escape with their parents. It's slapstick comedy and total schadenfreude as we watch them dish out comedic pain on Cruella and the thugs (one of whom is played by Hugh Laurie, before he got famous in the States for playing doctor). I remember seeing this in theaters when it first came out. I left feeling disappointed because it doesn't tell the story very well.

Glenn Close's performance is great, but the rest of the movie is hollow and not nearly as memorable as the animated film.
Labels: 101 Dalmatians seek the original