New story coming out, available through the publisher: https://furplanet.com/shop/item.aspx?itemid=876


(and now reprinted in The Furry MEGAPACK: https://www.goodreads.com/book/show/57455252-the-furry-megapack)

Very happy with how this story turned out and I'm glad to see it in print. Teaser is below! 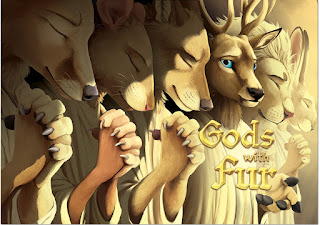 Abby twisted the cork from the glass bottle, shook a capsule into her hand and stared at her palm. She had taken one of these pills almost every night for the last fourteen years. Tonight she thought of all those people in the school, coughing and moaning and screaming at things that were not there. Nobody had died yet, but she had heard on the radio this morning that thousands had already perished in the plague sweeping the globe.

The scientists were at a loss to explain it. The population density was intentionally kept low to prevent the spread of disease, so by all logic and reason this plague should not exist.

Over the last few weeks Abby thought of the jackal while she listened to the news broadcasts. She remembered him prancing about Canvas, bragging about what he just made to the tiger and the cheetah and even the lion, arguing with them over how many of their plants and animals were dying, how it wasn't right to make something that affected what someone else created. None of it made sense then, but now it added up.

In her hand Abby held a choice: to sleep peacefully and wake up to a nightmare, or to visit Canvas again and find out if her intuition was right. She had not been to Canvas in eight years. This was the first time she wanted to go back.

She tipped the pill back into the bottle, corked it and set it next to the radio on the shelf. She removed her clothes. When she was a little girl, she often broke into hot sweats whenever she went there. The village only had electricity for six hours a day, and she didn't want to waste it laundering a few pieces of clothing. She could wash them in the river, but the scientists advised everyone not to risk it, as the plague might be waterborne. She thought she knew better, and now was the time to prove it.

She slipped under the thin blanket and lay her head on the pile of clean clothes. She used to have a pillow, but two weeks ago a stray dog had wandered in and chewed it up, along with several books and her winter blanket, and there would not be a supply train from the city for another month.

The sun was setting. The warm wind blew the curtain inward and waved it around. Her brother's mat was on the other side of the narrow room, empty. The farmhands were living in the makeshift village far away and dared not come back until the scientists could figure out a way to treat the plague.

The village scientists had been pleading with the city for extra electricity for days to expand their research, but their village was only three-hundred residents. Their labs were not expected to make any kind of breakthrough, which was ridiculous because it was Abby's village that had first isolated the proton more than a decade ago.

She was thrilled not to have to take night shift, but she shivered in the summer heat thinking about the sick she needed to tend in the morning. The spasms, the bleeding, the hallucinations, the mucus everywhere... The scientists insisted the plague was not airborne, but they also did not know how it was transmitted.

Abby knew. Her nerves calmed, and she began to slip across. The heat of summertime faded, and a new, more intense heat replaced it. The sleeping mat and the pile of clothes under her head now felt like sand. Canvas felt just as real as the world she left.

She opened her eyes. She was lying down in the desert this time. She rose to her feet, conjured loose clothing for herself, and took in her surroundings. There was nothing but majestic sand dunes as far as she could see in all directions. She was hoping to appear in the forest, but it seemed her childhood ability to be anywhere she wanted at will was weaker now.

Returning here after so many years was a strange sensation. As a child, this was her private playground. Now she felt like a stranger in an unfamiliar country. Canvas felt dangerous, and she disliked the change. She couldn't see them from here, but she remembered where the forest would be and ran in the direction of the trees. She glanced back and was relieved to see her bare feet still left no footprints in the sand.

When she was four years old, she had described the sensation to many doctors and scientists, but none could come up with an answer for why she was always so sleepy during the day. It wasn't until a few years ago she concluded that she never really went to sleep when she came here. She wasn't dreaming, but going to a real place where she was awake and alive, and yet Canvas also had dreamlike qualities. She could will things to appear, become invisible, fly--all the expected elements of a lucid dream

The doctors had diagnosed Abby with "chronic dreams," her being the very first to have the condition. The pills they prescribed inhibited them. Without the pills the doctors designed for her, she would never have been able to concentrate on her schooling. From her pre-school years all the way into her late teens she cheered every time the train arrived, bringing the raw herbs and chemicals the apothecary refined, distilled and combined to make the medicine that allowed her to sleep peacefully.

Now she was back. This had been her second home, and she had wandered these deserts and forests and mountains and oceans and observed everything that went on. She explored every corner of the place, completely invisible to all the inhabitants. When she knew the pills worked, she occasionally skipped her medicine just to come back. Now that she wasn't prisoner to Canvas every night and was free to come and go as she pleased, it was a playground as large as the imagination, all for her to enjoy in any way she wanted.

When she graduated primary school and had to help with the housework and the harvest, Canvas seemed like something she needed to leave in her childhood. She had taken her medication every night all through secondary school and grew up into a happy, normal young lady.

She heard voices over the next dune and crouched low as she climbed it. She peeked over the crest. The valley between the next two sand dunes was wet, and there was a giant snake with purple and green scales down there. He was coiled up and screaming at the heron flapping just above his reach.

"I told you to stop bringing rain here!" The snake's fangs were as tall as Abby. "This is the only place I can sculpt the sand the way I like it!"

As he shouted, the heron's wings created wind and blew the dry sand in Abby's face. The dunes on either side of them were visibly wearing away.

"And stop that! I wanted no wind here! It destroys my work! It took me years to mold the sand to look like this!"

"Your desert needs rain just as much as the tiger's forest. More so now that you have plants and animals to care for."

"Well, move the shark faster! Maybe it will only take me a few weeks to fix it all!"

Abby ventured to look to her left, the direction the heron's wings were blowing the wind, and sure enough it was raining on that side of the desert. She remembered the myth: the shark had a massive stomach and used it to swallow vast quantities of the ocean. She was unable to deliver it anywhere, but her lover, the heron, drew up the wind and cast her aloft, carrying her around the world so she could spread the rain. 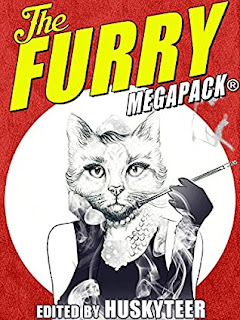 Deity Theory now available in the Gods with Fur anthology. and The Furry MEGAPACK