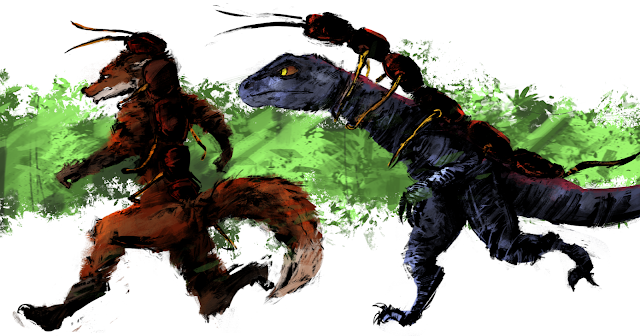 Illustration by Sirspacedragurn of the planet Kattaaka, from Dangerous Thoughts. Thanks!

Centipedes really do creep me out. Why the hell did I write an entire chapter in which giant centipedes are clinging to the backs of our heroes?? Adventure ho!


Two Ninelegs crawled down a tree behind the Archeons. Their bodies were segmented and could function with as few as two legs on the ground. Eight of their nine legs were as articulate as fingers. The ninth leg looked out of place because it was a third digit on the final segment that did not assist in walking. It dangled limply as the insect crawled. They were only up to Kylac’s knees in height in this position, but if they raised themselves on their hindmost legs, they would be twice as tall as the fox.

One insect crawled up behind Kylac. It raised its body to its last pair of legs, wrapped the fox’s torso in its arms, lifted off the ground, and wrapped the last pair around his waist. Its top two segments towered over Kylac’s head, legs clutching his shoulders and skull.

The second insect climbed up the back of Deka’s leg, over his hip, along his spine, rose up the curve of his neck, and curled its nimble legs around it. The final segment gripped the back of his leg.

Each Ninelegs had wrapped them in a predatory killing grip. The Relians were used to planets with higher gravity than on this world, and the extra weight only made them feel normal again. What neither wanted to think about was the poison stingers poking between their legs.

The Ninelegs species had a stinger as wide as Kylac’s arm on the rear of its abdomen. Its entire lower segment was filled with venom meant to paralyze prey while it consumed it alive.

The insect clinging to Kylac’s back held its stinger between his anus and testicles. The one clutching Deka’s neck and lying along his curving spine aimed its stinger just above his slit. Evolution had conditioned them over hundreds of generations to aim for this spot on their prey as it was the most vulnerable place on an exoskeleton. Though it was instinctual and the bugs couldn’t help themselves, it made the Relians nervous every time they visited this world. After a moment, they calmed down and began to hear with their noses.

You are Archeons from Rel. What happened to the portals?

“Our planet was destroyed,” Deka said. “Whatever tore the planet apart also tore the portals away. Every Archeon with a way to Rel is either dead, unconscious, or unable to make a sphere to another world.”

The two insects clinging to them did not hear their words. They were taking in their odors. A Relian’s scent was much too weak to travel very far and be picked up by anyone else, so the insects digested their signals and parsed them into stronger odors the other insects could detect, and then transmitted those scent signals into the wind.

The powerful wind carried their words over the trees. Flying Sixlegs and treetop-dwelling Ninelegs took in these signals. They rebroadcast the odors to others below the trees. Everyone smelled what they were saying.

Kylac ignored the stinger poking his testicles. The Ninelegs on his back sensed his discomfort and held the stinger a claw’s reach lower, but the constant flexing motions made Kylac nervous.

Kylac understood the instinct was too strong to fight, so he ignored the sharp taps between his legs and continued where Deka left off. “The Selts told us your Archeons are vulnerable to brain damage. Are they all right?”

There was a long pause as the Ninelegs picked up the odor of Kylac’s words and rebroadcast it to the forest. Then, slowly, answers came from the wind.

They are dead. Dropped suddenly when the portals went out.

“I am so sorry,” Kylac said. “I wish we had answers. Were any offworlders here?”

Many researchers. Many lookers. They are safe.

No. We are very sorry as well.

These were not words. The entire troposphere had changed scent to express grief. The entire civilization cried. The odor broke apart, and now multiple odors hit them at once. Thousands of voices drifting in the wind.

The Ninelegs leaned far over their heads, trying to enclose them so they wouldn’t be too overwhelmed by the many voices of this planet, but it wasn’t necessary, as the Relians were capable of taking in that many scents and processing what every individual was saying.

The entire population was asking if they would take the offworlders home, for some of them were not well breathing the atmosphere for so long.

“We will take them to Selta,” Deka said.

“Is there anything we can do to help here?” Kylac continued.

A long pause. The entire population of Sixlegs and Ninelegs was speaking to them on the wind, but it was not overwhelming for the Archeons.

The portals were useful for fast travel, but we are fine without them. We ask if an Archeon is able not to forget about us.

“We will tell everyone we can not to leave you isolated,” Kylac said.

“Where are they?” Deka said.

We brought all to a place safe from the dangers here, waiting for someone to come. We will take you there.

Two Sixlegs descended from the sky and wrapped all six legs around their bodies, mouths perched on their throats. Deka and Kylac smelled no hostility, but gratitude and eagerness. It was instinctual to hold their mouths to the necks of their prey, so they rested their mouths on those places on Deka and Kylac.

They lifted the Relians off the ground and flew them over the trees. Nothing blocked the scents of this world now. Few worlds tested the limits of how much information their minds could process, but even for Archeons as experienced as Deka and Kylac, this world was incredible. Every scent was a voice. So many scents equaled so many voices hitting them at once.

They opened their eyes at last and witnessed the sky filled with Sixlegs. The treetops were crawling with Ninelegs. Everyone had a unique scent, and it was all up here in the canopy.

Treetops whooshed by below them.

The starlight was bright and hot.

The mood of the planet was hope and thanks. Everyone was relieved to know what happened to the portals, and that the people left behind would be leaving for somewhere safe soon. They still grieved for the loss of their Archeons and so many people across so many other worlds.