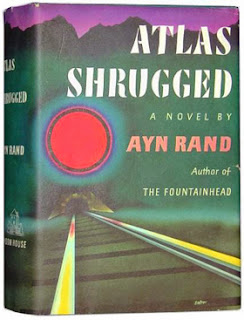 Reading how White Supremacists see themselves in Camp of the Saints made me consider Atlas Shrugged from a different perspective.

Apart from the obvious takeaways mentioned earlier, there's another way to look at this novel, and it answers the questions of why the book has endured so long despite being so terrible on so many levels, and why Rand wrote it in the first place. Surely she didn't really believe the rich were just inherently better than everyone else by virtue of their wealth, did she?

The book also speaks to people on another level. Specifically, it speaks to people with psychopathic tendencies. The definition of psychopath is a lack of empathy, and Ayn Rand describes a world in which certain people who feel no compassion for their fellow creatures are made to feel guilty for being what they are.

Isn't that what culture continuously states? That if you have no compassion, you're a bad person--in fact, you are the villain in every movie, every novel, every poem, every song ever written. From birth, you are told that to have no regard for how your actions affect others is a bad thing, and it makes you a horrible person and you are dangerous and need to be converted. This forces the psychopaths of the world to live a lie--to act in a way that creates the illusion they have empathy and compassion for other human beings so they can function in society.

Rand takes this shame society places on people like herself and reframes it as a virtue: people without empathy are the kind of people who get things done, who make the world go 'round, the best and brightest in society. They're the type who tend to be able to acquire billions of dollars, therefore they are the real human beings. Everyone else who is ruled by empathy (and Rand exaggerates the empathy to comical levels in Atlas Shrugged) is trying to run the world that way, and it's a disaster. She must have drawn the conclusion that Communism, as she imagined it to have been practiced in Russia, was empathy taken to its logical extreme.

Rand does more than merely tell the rich they are God's gift to mankind. She is speaking to all people who secretly have no empathy for other human beings and telling them they are not alone, and they shouldn't feel ashamed for being what they are. They should be proud, and they should not have to hide what they are because this lack of empathy is their greatest asset. They're the kind of people who get things done, and they are destined to rule the world.

This is why Atlas Shrugged has endured. The business world is run by people who have no empathy, and they have been raised on a steady diet of objectivism, taught that empathy is in fact a toxic emotion, and the lack of compassion is man's natural state. If you view the story from this perspective, it makes much more sense.

Of course, Rand leaves out the reality that psychopaths tend to be best at using other people as tools, regardless for how it affects those people, and this is how they make all that money: by living off compassionate people's work and enriching themselves in the process. This is, of course, the very behavior Marx was writing about in his manifesto on communism. 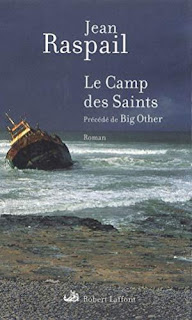 The reason I draw parallels between Atlas Shrugged and Camp of the Saints is because both books essentially do the same thing. They both take a group that is typically shunned by collective society and cast them as the heroes, the people who see the truth despite society telling them they're bad people. In Camp of the Saints, racists are the guardians of civilization. In Atlas Shrugged, psychopaths are the people who get things done in the world.

As with Camp of the Saints, there are people out there who believe Atlas Shrugged is how the world works. These people are in positions of power, and they are molding the world into this shape. Keep that in mind next time you vote.
Labels: Atlas Shrugged Ayn Rand camp of the saints