Psychonauts 1 and 2 Are Worth Your Time

I attempted to play Psychonauts years ago, but the game failed to grab me past Agent Nein’s level. I think it’s the progression. At the start, the game is a confusing mess of controls, mechanics, and upgrade info. It’s a lot to take in so early. 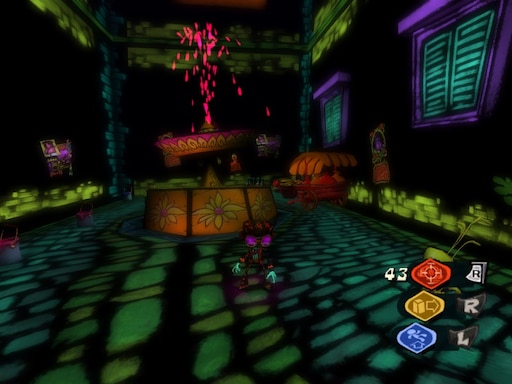 Plus, the OSX port didn’t work very well. The PC version is much better.

I tried again, and yeah the game has pacing issues, and level-up is confusing and never really feels like you’re progressing. There’s no sense of “my attacks were weak against this foe before, but now they’re stronger.” Switching between your different psychic abilities is confusing and most of the time you can just punch everything. Some areas require the different abilities you learn, but not all.

The game throws an awful lot of information at the player at the beginning, and it has problems regarding leveling and progression, but once you get past that, everything comes together. You’re in a camp for psychic warriors, where you can learn how to levitate objects, how to shoot lasers with your mind, and so forth. Kids come to this camp to hone their mental abilities, and now you’re here to hone yours.

The game becomes engaging when you acquire the mental door that allows you to enter other character’s minds and help them deal with their mental problems.

The Milkman. Oh, wow, the Milkman. I loved that segment. That’s when the game finally gripped me.

It’s when the game’s writing shines. What Psychonauts lacks in progression and intuitive gameplay it more than makes up for in character, writing, and artistic style. No other game looks like this. Edgar’s level is especially striking (the whole area is in blacklight). You’re doing more than just progressing. You’re helping various characters deal with their buried demons and relieving them of their mental burdens. That’s deep.

Why this game wasn’t a bigger hit when it came out is anyone’s guess, but I’ll guess it was the information overload at the beginning turned players off. It really is overwhelming, all the stuff the game throws at you from the start, and it doesn’t begin to pay off until much later, so that’s a difficult wait. Camera bugs aside, once it does pay off, your reward is memorable characters, outstanding writing, stellar voice acting, memorable combat, and one hell of a final confrontation with your own inner demons.

This is worth anyone’s time.

Psychonauts 2: The game is seamless. Feels like no time at all has passed since the original. I don’t know how well new players will be able to pick this up, as it relies so heavily on the events of the first game for backstory.

I’m having a hard time believing that after everything Raz did for the Psychonauts in the previous game he’d be relegated to an intern once he’s actually at Psychonauts HQ, but rising within their internal bureaucracy works from a story perspective and gives the player a moment of engagement.

Watching Raz do something selfish such as make new mental connections in the big boss’s mind just so she’d be more open to letting him go on a mission, only to face the consequences later and regret his actions, engaged me right away. That’s the kind of thing missing from Psychonauts 1: a moment early on which hooks the player in terms of story.

Raz is gaining new psychic abilities, and now he has learned how to misuse them. He violated someone’s mind, made a connection that caused her to become obsessed with gambling (leading to an amazing casino level!), and has to correct his own mistake. She forgives him only because she herself did something similar to someone else. The Psychonauts gave her a second chance, so she is giving Raz one as well. That’s a mature thing to put in a game story. 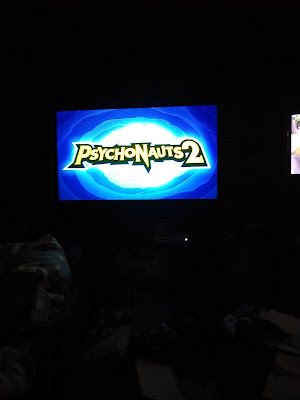 I was on board with the story, which leads me to what might be my only criticism: the humor isn’t as strong, and the characters you meet aren’t as interesting or lively as they were in the first game. In fact, the side characters are bland. You can meet people in the forest and in the Motherlobe (the hubs), but the encounters and conversations you have feel like placeholders for bigger interactions still to be written. For example, you meet a girl in the forest trying to catch a goat, but at no point do you have the option to help her catch that goat. Your father is also in the forest, trying to set a pine-cone on fire with his mind, but at no point can you help him achieve this. These feel like wasted opportunities to connect with these characters. The original had its characters move about the game world, doing different things, and you talk to them at various moments. The summer camp for student psychics felt like a living place with people moving about doing all sorts of interesting things without you. HQ and its surrounding quarry feels dead by comparison. The sequel doesn’t let the player engage with the inhabitants the way the first game did, and this is a missed opportunity.

On the plus side, combat is much improved over the first game. Certain enemies are weak to certain psy abilities, which encourages the player to use more of the abilities they acquired, and there are more types of enemies now to keep the player occupied with strategy. No more punching everything. Now using every power at your disposal is required. That’s a good thing.

I wish they hadn’t kept the control scheme. You can assign the trigger buttons to any psy ability you have, and I keep forgetting which one I assign to which button. I compensate by keeping 3 triggers to the same powers, and one button (R-trigger) swaps out as needed. This works in most situations.

(For the record: My L-shoulder is psy-blast. L-trigger is levitation. R-shoulder is telekinesis. These are the most commonly used abilities and keeping them as constants came in handy. I miss L-trigger as strafe. Perhaps I’m too used to Ratchet & Clank controls.)

I seem to have a harder time staying on platforms compared to the first game. Unsure why that is. For platforming, it doesn’t feel as fun as the original, but for combat, it’s way more enjoyable. The article I read in GameInformer stated this was a huge shortcoming of Psychonauts 1 the team wanted to correct, and they succeeded.

Really my only complaint with Psychonauts 2 is that its side characters are so weak. So many missed opportunities to let the player connect with them. So many side quests that could have been. Its main story more than makes up for its shortcomings though. It builds up to something. A villain from the past is coming back, and Raz is connected to this enemy. Raz’s mission is to help the Psychonauts recover from the damage their battle with this villain some twenty years ago did to them. That’s a profound concept for a game story.

I played this game just days after beating the first one, and I still felt nostalgic for the original. Bravo to the team for employing all the mechanics and aesthetics of the original and keeping the same tone while correcting its shortcomings. I wish the side characters had been better written and allowed the player to connect with them more, but the team put all their effort into making combat so much better this time, and to the main story, which is touching and satisfying and had me guessing all the way up to the end.

It has a gay wedding, and I love the librarian level. Such a wonderful look and feel. Each area has a theme that is meaningful to each character, and it all relates to that battle they endured years ago. Getting to know each Psychonaut and helping them through the trauma they’ve been suppressing for so many years is engaging in and of itself. Everything makes sense, all leading up to an amazing tour through the mind of the traitor within HQ—the Grulovia ride has the most gorgeous and stylish visuals in the game, not to mention the most fittingly beautiful and annoying theme song I’ve ever heard!

The battle twenty years ago didn’t just damage the Psychonauts. It damaged someone else, too, and we get to hear about it from their point of view. All the clues add up. Everything comes together in an enormously satisfying way. It’s a well-crafted story to match well-crafted combat, more than making up for any shortcomings the game has.

These games are smart. They are worth anyone’s time.