90% of everything Hollywood does is adapted from a book, or short story, or comic. Never settle for an adaptation. Seek the original! What did the author write? I've wanted to do this one for a long time, and I finally got around to reading the original story.

Before I begin, I won't forgive myself if I don't plug this. Until this story was published in The New Yorker, this is how the rest of the country knew Wyoming:

But now thanks to Annie Proulx, we know Wyoming as the setting for that story about two country boys who fall in love. This is proof that one person can change the world! Do not underestimate the power of writing! …and controversial sex.

It begins in 1963. Ennis Del Mar and Jack Twist are high school dropouts looking for work wherever they can. They find it on a ranch. The rancher is looking for people to sleep on the mountain and guard the sheep during the summer. So these two spend the summer on Brokeback Mountain, watching sheep, shooting coyotes and the breeze.

Then on a cold night, Ennis nearly freezes and Jack shouts at him to sleep in the tent for Christ’s sake. So, huddled in a sleeping bag together, Jack “seized Ennis’s left hand and brought it to his erect cock.”

Wow. For a story that had been so eloquently written for some ten pages, it sure blasts us with this shock. Then Ennis goes along with it! There’s no stated explanation for why this happens. It’s definitely spur-of-the-moment, and from that moment on, they never speak of it directly. Sex just happens on its own, sheep be damned.

When the job ends in the fall, they go their separate ways, live their separate lives. They both agree it was a one-time thing. Nobody’s business but theirs. Jack and Ennis get married, have kids. Then, four years later, Jack finally finds Ennis again and they meet up. And like before, sex just happens.

They get a hotel room. Jack says he wants to run away and start a life together. Hell, it’s the 60’s, a man can just up and drive away to some other part of the country and nobody will ever find him again. Ennis is the one who holds back. He’s got a wife and kids, and he doesn’t want to leave them. But he does admit he never should have let Jack out of his sight after their job on the mountain ended. He likes doing it with women, but he’s whacked off thinking about Jack countless times. At the same time he’s scared for his life thanks to his dad showing him what happens to queers in these parts.

Thus sets the cycle for the rest of their lives. Meeting up once or twice a year. Even after his wife leaves him, Ennis still doesn’t run away with Jack. Meanwhile, Jack is the dreamer. He recognizes he’s happier with Ennis than with anyone else and wants to run with that. He resents Ennis for not running with him.

But nothing lasts forever. Their friendship is cut short, and now that there’s no chance of it happening, Ennis is finally ready to make the leap with Jack.

Brokeback Mountain paints a very sad picture of a chance not taken, and feelings never acted upon, but still there. I can see how it got into The New Yorker. It presents the scenario without being vulgar or disgusting.

And directed by… Ang Lee?? Yes, the man who directed a movie about gay cowboys also directed Crouching Tiger, Hidden Dragon in the year 2000, and Hulk in 2003. How the hell do you go from Hulk to Brokeback Mountain?! 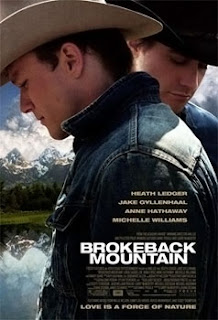 Then there's Ennis, played by Heath Ledger. How do you go from playing a gay cowboy to the Joker!? I think it shows just how talented Ledger really was and why it's such a shame he died.

First, I applaud the movie for daring to tell a story that nobody else had to guts to tell. Even in 2005, this was a pretty taboo thing to discuss. To its credit, the movie follows the original story fairly close, but a few key details were left out that made all the difference.

The film starts off on Brokeback Mountain. Two guys watching sheep for a season. Ennis sleeps outside, while Jack sleeps in the tent. All is fine until it gets cold out and it forces them to sleep in the same bed to keep warm. Then suddenly they have sex.

In the story, we’re told very clearly what leads up to it, but of course you can’t show that in a movie without getting an NC-17 rating, so it just comes out of nowhere. It sure confused me when I saw it. Like…damn, where did that come from?

Here’s the problem with movies trying to address this subject. Movies are a visual medium. The story just tells us what happens the rest of the summer on the mountain, and we can accept this because it doesn’t have to shove the details in our face anymore. To show it in the movie would’ve given us no choice but to look at it, so the movie doesn’t show much of their time together on the mountain.

Then the scene where they part ways. Ennis breaks down crying, but it doesn’t explain why. The story does, in the hotel room when they meet up again after four years, but the movie leaves this information out.

That’s what’s missing from the film. A sense of genuine affection. In the story, we see very clearly that Ennis and Jack really do love each other. They actually talk about it, how much better this is than with any woman. It shows them close, it shows them getting personal, even discussing the possibility of running away together.

This conversation never happens in the movie, but it should have, because it’s the most important in the story. It shows exactly how they feel about each other, without sex. I don’t understand why this wasn’t done in the movie. There is a perfectly clean scene in the story where Jack just walks up behind Ennis and holds him. They share a moment without ever getting physical, and this could’ve been a great way to show they really do love each other.

In the movie, we see more of them fighting and arguing than sharing genuine affection and enjoying their time together. These two men are never portrayed as a couple in love, or hell, even as friends, and this imbalance undermines the story. They very rarely speak to each other, and when they do it's rarely anything deep or meaningful. From what we can see and hear, they spend most of the movie fighting. Aren't they supposed to be in love?

The short story is a narrative. It’s not shown so much as told, and this works all right for the most part. But a movie has to show everything that’s told, so it bulks up the story with plenty of scenes of daily life. The screenwriters were trying to convey the contrast between the aggravating, depressing and even impoverished lives they lead, with the ideal, carefree life they have together.

I get that we're supposed to understand their life with each other is a hell of a lot more enjoyable than their real lives, but the movie never shows this. We don't get to see this ideal existence, so it never comes across as preferable to their real lives.

Again, the story just states it, so the movie had to adapt it into something shown, but it doesn’t work. The fireworks scene with Ennis, for example. It’s striking, but it doesn’t add anything to the story. So he punches that guy out because he's being disrespectful, so what? Jack’s argument with his father-in-law at the dinner table is another scene like this. Striking moment, but it doesn’t mean anything, and this is the majority of the movie. Not the romance, but their everyday lives.

The movie also tries to portray the confusion Ennis is going through, and rightly so. Ennis is confused that he has feelings for this man, and it takes him decades to come to terms with it. This confusion is not a big deal in the story, but it makes sense to show this angle. But since he lacks the vocabulary to express it, we're never let in on it, and these emotions do not come across visually. It's a puzzle what's going on in his head.

But the ending is heartbreaking. I admit it caught me off guard. Ennis’s final words in the film are barely audible, and they're loaded with meaning. But the movie never gets across Ennis's internal dilemma, and it never portrays these two men as genuinely in love, so the meaning is lost.

The movie tried so hard to adapt this story into a personal drama, and it could’ve worked if the film hadn’t left out the conversations between Jack and Ennis. Those were the moments the story showed them connecting on a personal level, and the movie needed to show that, too. Maybe it was going for these two being "normal" men. Never talking about their feelings, not even aware they even have feelings. You know, the strong, silent kind of guy. It doesn't help portray them as lovers when they never show it or talk about it.

Again, bravo to the movie for even attempting it, but the original story does a better job showing that these two men really do love each other.
Labels: Brokeback Mountain Garfield and Friends review seek the original skip the movie Wyoming