The man stood in the middle of the bonsai valley. Miniature redwoods, birch, sycamore and every other species surrounded him in the valley, reaching no higher than his waist. Between these were even tinier bushes and shrubs. The flowers that grew on them were miniscule to match. He felt like a giant.

The man was bruised, bloody and caked in mud. He masturbated. He planted his seed, and now the man stood exhausted. He had planted his seed all over the valley and had nothing left in him now. He collapsed and slowly died of starvation, content that he had succeeded...

New story released in the anthology from Bizarro Press: 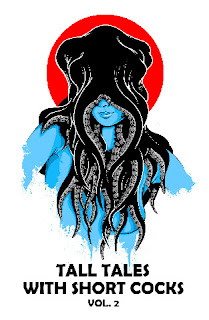 "Life Cycle" is mine!

Originally written for Nicole Cushing's How to Eat Fried Furries short story contest, I had high hopes it would win. It didn't, but it found a home in Tall Tales with Short Cocks volume 2! Very proud of this one. Definitely one of my stranger stories, not for the casual reader, but perfect for those who like weirdness to be extreme. Check it out!
Labels: bizarro short story writing