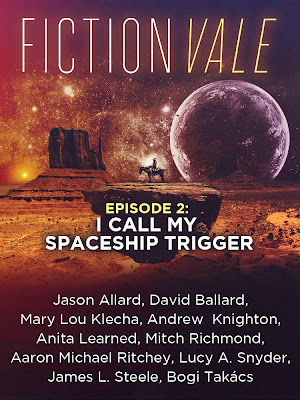 New short story is published, and the issue is released. Fictionvale volume 2. My story is Beneath a Sponsored Sky. Though the issue theme is "space western" my story is not a space western, rather general science fiction.

The old man sat on a chair on his back porch, rocking back and forth, staring at the grass. He would have liked to look at the stars, but there were none to see. He refused to look at the animated images and logos in the sky. Decades ago, he convinced himself that turning his head to the ground was an act of rebellion, like the mute button on the TV once was.

So the old man watched the plain, motionless grass while above him, behind the sparse clouds, animated cartoon characters danced, company logos flashed and rotated and flipped, dramatic text scrolled and zoomed in and out. Five hundred individual regions in this hemisphere, each displaying its own animation against a black background that simulated the night sky of old. Some sequences were as long as five minutes, others as short as a couple seconds, looping again and again and again from sundown to sunup.

As a boy, the old man clearly remembered sitting on the porch with his father under a cloudless night sky and the land would be pale white under the moonlight. The Earth was no longer illuminated by the moon at night. Now the trees and grass glowed faintly red from the light of a corporate logo above. The old man sighed, as he did every night that he pondered it.

Movement out the corner of his eye caught his attention.

It's been a long time coming and I really like how this story turned out. Check it out on Fictionvale's official site!

or if you prefer Amazon, check it out there, too.
Labels: writing