90.7% of everything Hollywood does is adapted from a book, or short story, or comic. Never settle for an adaptation. Seek the original!

In early 1900's England, Mr. and Mrs. Banks endure a most difficult circumstance: their nanny has quit, and now there is nobody to tend to the four children (because in polite British society, it is socially unacceptable for the parents to have any part in raising their own children). But the wind brings a new nanny, Mary Poppins. 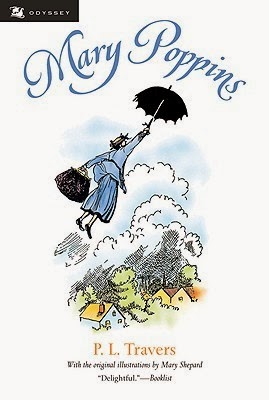 The book is episodic, with each chapter telling an adventure that happens when Mary Poppins is around. The first adventure concerns her day off, without the children. She meets Burt, the man who sells matches on the street corner when it rains, and makes chalk drawings when it doesn't. He wants to take her out to tea, but doesn't have enough money, so Burt takes Mary Poppins into one of his chalk drawings, where they are served tea and don't have to worry about money. Burt and Mary go way back, but we're not told anything else.

In another adventure, Michael finds a compass, and Mary Poppins uses it to take them on a brief trip to all four corners of the world. They speak to a Panda in the East, a dolphin in the west, and so forth. Everyone knows and respects Mary, even the animals, and Jane and Michael ask how it's possible, but Mary never tells.

Another adventure is about the baby twins, John and Barbara. Mary Poppins can speak to the animals and understand what babies say. She sternly tells the twins that someday they will forget how to understand the wind and the starling. Everyone does, except Mary herself. This is the only hint we get as to who Mary Poppins is. This adventure is actually a little heartbreaking. I think every adult has a sense that they lost something when they grew up, though no one can quite put it in words.

My favorite adventure takes place on Mary Poppins' birthday. They take a trip to the zoo, and on this day, the animals are free and the people are in the cages, yet they don't seem to know it. For some reason, the king of the animals has a great deal of respect for Mary, treating her like a royal guest on her birthday. Why? She'll never tell.

Everybody in England must have been no fun back then. One of my favorite exchanges is at the end, when Mr. Banks has lost his black bag, and finds it in the study when it should have been by the umbrella stand. He asks whoever would have left it there.

Mrs. Banks replies: "You did, my dear, you when took the Income Tax papers out of it last night."

Mr. Banks gave her such a hurt look that she wished she been less tactless and had said she had put it there herself.

Because in polite English society, one does not actually say anything to anyone. Why, the very idea of stating the truth so directly, especially a wife to her husband! The very idea!

Did people really talk like this, or is this storybook dialogue, or parody of British politeness? I fear I shall never know.

Mary is always stern, vain and apparently no nonsense, but she can make anything happen and when she's around everything seems to be better. There is no story going on to tie the chapters together. It's simply the wonderful and amazing things that happen to Jane, Michael and the babies while under Mary Poppins' care. The episodes are imaginative and fun, and Mary herself is a complete mystery. A nanny who is wonderful and amazing, even if she is closed and stern.

I watched the movie a while ago and I'm happy to announce I enjoyed the book, too. The book gave the filmmakers an awful lot of material to work with.

The big change was the filmmakers added a story to tie these adventures together. Something about Mr. Banks doesn't like all this whimsy Mary Poppins is allowing his children to experience and instead wants them raised to be serious, productive members of British society. Yeah, it's pretty weak, but it tries, and I suppose for a movie, something had to hold everything together.

This is not done in the book at all. Mr. and Mrs. Banks are barely in the story. No Votes for Women, no big commotion at the bank, even Burt is only seen in one chapter. The book is all about the adventures that happen to the children while Mary Poppins is around, and it doesn't need anything else.

I always thought the movie's attempt at a story arc was weak at best, but it hardly matters because Julie Andrews nails the role so perfectly. She looks the part, she talks the part, and she acts the part exactly as Travers wrote in her book. She is definitely less stern in the movie. In the book, one wonders how anyone can like this woman. She's arrogant, vain, closed, no fun. Every time the children express even the slightest sense of adventure or imagination, Mary is first to say don't be foolish, now come along.

In spite of that, she still manages to be likable. It's the mystery of her character. The way the animals treat her, the way other people treat her--like a queen returned for a visit after a long absence. Everyone seems to know her, and you can't help but be drawn into their reverence.

The film keeps the spirit of the book in tact, although it minimizes Mary's sternness and focuses on the adventure. This makes the Mary Poppins in the movie seem like some magical creature visiting the Earth, while the Mary in the book is more like a real person who has some extraordinary knowledge she refuses to share.

Every day with Mary is a day full of wonder and adventure. In the book, Mary is with the children for nearly a year, which emphasizes that her job is to care for the children. She'll be out on an errand with the children, and just like that an adventure begins. Adventures happen out of ordinary, everyday life with the nanny, whereas the movie is about these adventures replacing everyday life. It's not what Travers intended, but it does work on its own.

I like both. The movie is a fun spectacle, and the book is about adventure coming out of everyday life. Check it out sometime.
Labels: Mary Poppins seek the original