Published in Typewriter Emergencies in 2017. A little flash of inspiration thanks to my roommate's decision to pay for satellite TV, and my first experience with the luxury of DVR. For someone who grew up in the era of programming VCRs and appointment television, this was indeed a luxury.

So... what if our pets took advantage of it, too? 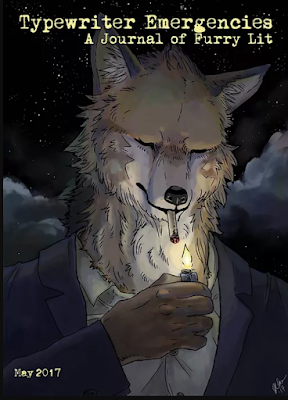 Lisa shouldered the door open and walked inside, clutching three bags of groceries on two arms. The elderly woman closed the door with one foot and looked around the living room.

“Babies! Mommy’s home! Babies, where are you?”

Lisa stood at the door for a moment. Uncertainty quickly changed to bewilderment. This wasn’t normal. They always came to the door and welcomed her home, but her three dogs and four cats were nowhere in sight. She glanced at the fish tank against the far wall. She didn’t see the fish in it, just empty water bubbling away. Next to the fish tank was Larry’s tank. The plastic roof and sunlamp had fallen on the floor, and the gecko was gone.

The fish tank and the muffled drone of the refrigerator were the only sounds in the house. It was quiet. It even smelled different.

Lisa looked around one more time. She didn’t see or hear any movement through the whole house. Shrugging off a slight chill, she stepped into the living room, grocery bags carefully balanced between both arms.

Suddenly a lone howl came from the bedroom. The howl was joined by two others and rose in pitch through the back hallway. Lisa’s three shiba inus stormed into the living room and surrounded her on three sides. The ankle-high dogs snarled at her, teeth bared, curled tails held as high as they could be.

She walked right into the jaws of the little dog behind her. As one the pack jumped on her, grabbing her pants with diminutive jaws, pulling her in three directions at once. Lisa tipped from one side to the other. Groceries spilled out the top of the bags as she tried to steady them.

Her shibas tugged and growled and yanked her from side to side. Finally Lisa tipped over and fell down on the carpet. The bags of groceries split open and spilled produce, coffee cans, frozen boxes and glass jars around the living room. The bags of sugar and flower burst open and covered a blast radius in white powder.

Lisa screamed as the shibas jumped on her and tore at her pants. One of the dogs worked loose a strip of cloth. He held it in his muzzle and shook his head violently. The other two dogs let go of Lisa and chased the one with the piece of cloth. The victor ran from the living room to the back of the house, the other two shibas following close behind. A second later, a chorus of howls came from the bedroom.

Lisa was about to roll over and stand up, but she noticed somebody watching her from atop one of the floor lamps next to the couch, her black and white feline, Oswald. His mouth was partially open, and the look in his eyes was... predatory.

Lisa saw movement out the corner of her eye, and she turned her body around to look. Her three other cats had appeared from nowhere. All of them looked at her in a way that made Lisa feel like a helpless, wounded animal.

All four cats had elongated fangs. They were so large they made their entire mouths hang open. She glanced at Oswald, who had just hopped down from the lamp and was stalking her from the other side.

All four cats jumped on her at the same time, going for the throat. She felt little teeth on her neck, and something else poking her that didn’t feel like teeth. Lisa rolled over, screaming and waving her arms. She hit a few bodies. One grey cat flipped over, landed on his side, his long fangs flying from his mouth. As if realizing he was naked, the cat scampered away and melted into the house. Oswald and the two white cats, however, hadn’t lost their fangs, and they hopped on the couch and... snarled at her.

Lisa had never heard a cat snarl before, and it was funny. She rolled to her feet and stood up. The cats snarled again, flashing their elongated canines at her. Lisa took one step towards them. The cats scrambled away and scattered through the house.

Lisa felt something pricking her in the neck. She plucked it out. It was a piece of plastic. It looked like a fragment of a drinking straw. She looked on the floor, between the groceries strewn about. Other pieces of plastic straws, nibbled down to look like fangs, lay scattered around. She picked them up one by one, surveyed the damage to her shopping, and shouted to the house.

“You’re all in big trouble! You can’t hide forever! When I find you, you’ve got some explaining to do!”

Finding no more fangs, Lisa stormed into the kitchen. Multiple straws of various colors lay about, torn to bits. The entire counter was covered in prototype fangs, pieces of failed teeth, and finished teeth too large or small to fit in a cat’s mouth. Also on the counter was food coloring, used paint brushes, and fragments of construction paper. Lisa pondered this for a moment, and then saw movement from the corner of her eye.

Her gecko, Larry, stood at the end of the kitchen counter, upright on his hind legs, very wobbly. A few pieces of red and blue cardboard were taped to his back, making him look like he had ridges. He held his hands in front of him. Scotch-taped to his hands were larger pieces of drinking straws ranging in color from blue to pink, cut and nibbled into the shape of sickle claws. Taped to each of his hind feet were two large plastic claws on the inner toes, both of them green. Lisa wanted to yell at the gecko and laugh at him at the same time.

The tiny lizard hissed and tried to make a growling sound. He charged her like a dinosaur, flat feet making light thumping noises on the kitchen counter. Lisa didn’t feel the slightest inclination of fight or flight. In fact, she smirked. Larry awkwardly pounced on her and sank his teeth into her skin.

Lisa just now noticed he had a mouthful of tiny, plastic teeth as well. They pricked her. She yelped, lifted her hand and backed away from the kitchen counter. She shook Larry off and the lizard plopped onto the counter. Larry’s plastic teeth and claws fell off. Most of the paper ridges on his back also peeled off, leaving him tangled up in tape now. He scampered on all fours behind the sugar canister.

Lisa looked down at her hand. A small, plastic tooth stuck out of it. She brushed it off, sighed, and looked around her.

“Playtime’s over, kids,” Lisa said to the house. “Who started this? Who put you up to this?”

She waited. No answer came, but she thought she heard cat laughter from the living room.

No answer, but more cat laughter. She even heard lizard snickering from behind the sugar.

“All right then, I’m turning on the TV.”

She walked out of the kitchen, stepped over the busted bags of groceries, and stopped at the couch. She found the remote on the coffee table, bent over to pick it up and heard a splash from the fish tank. She looked up just in time to see a goldfish with large plastic teeth sailing through the air right for her face. Lisa inhaled to scream, but the fish landed square on her nose and latched on. Six more fish flew out of the water and landed on Lisa’s face. The impact was like a hail of golf balls. Lisa careened backwards and landed flat on the carpet, head just missing the coffee table.

The fish chewed on her. It didn’t hurt, but it was unexpected. Lisa flailed about, then realized she wasn’t in pain, and her fish were actually the ones in trouble. She regained her composure, rose to her feet and stood up. The fish were still latched onto her, still chewing but not even coming close to breaking the skin.

She walked to the tank, plucked the fish off her face one by one, and dropped them back in the water. Plastic straw-teeth popped from their open mouths and drifted to the bottom. Lisa flicked the pieces of fake teeth off her skin, sat on the couch, picked up the remote again, and hit the power button.

She turned on the DVR. She navigated to the programming history. In the background she heard the cats snickering, the fish laughing, dog tails thumping against the carpet, and the gecko trying to hold it in. Lisa read the list of TV shows aloud.

“Wolves at Our Door. Smilodon: the Saber-toothed Cat. Walking With Dinosaurs. And River Monsters: Piranha.”

The house itself seemed to be laughing behind her back. Lisa set the remote on the couch and stared at the list.

“All right, everybody, no use hiding from mommy. Time to come out.”

Like a gallows march, the cats and dogs came out of hiding from all around the house. Larry emerged from the kitchen, walking on all fours, tape sticking to the carpet. The group gathered in front of her, looking at her, but just avoiding eye contact.

She looked at everyone as she spoke. “I’m very disappointed in you. All of you! How many times have I told you? Animals on TV do things, and it’s okay for them, but it’s not okay for you!”

“You could really hurt someone that way,” Lisa continued. She turned and looked over her shoulder, at the fish in the tank. “And you! I’m surprised! You know you could’ve put yourself in real danger.”

She turned back to the cats and dogs and lizard once more. Their eyes wandered, looking at everything but her.

“You’ve broken my trust. As punishment, I’m setting parental controls on the TV.”

“Don’t awwww me,” Lisa said, shaking her head, smiling. “You knew what would happen. Now go, run along, think about what you’ve done and how you could’ve hurt yourselves.”

The animals wandered back through the house. Lisa picked up Larry and placed him in his tank. She replaced the cover and heat lamp as the gecko peeled the tape off his body. He sunned himself under the lamp for a minute, and then disappeared into his little cave, giggling.

Lisa set the password and the parental controls to block every program that did not have a TV-P rating (suitable for pets). Lisa left the TV on some talk show and started gathering up the groceries. She wished she could make them help clean up the flower and sugar, but she was sure they’d learned their lesson.