This was the very first Stephen King book I ever read. The situation is so unique and suspenseful the pages just flew by and I couldn't stop reading.

Paul Sheldon is a famous author. He is crippled in a car crash, but thankfully he ends up in the home of a former nurse, Annie Wilkes, who takes care of him while he recovers. Too bad Annie turns out to be every writer's worst nightmare: the obsessed fan.

A very character-driven book, Misery is about Paul's struggle to stay alive while he is at the mercy of his paranoid and maniac-depressed host. King succeeds in putting the reader in the middle of her instability right along with Paul. We're just as much at the mercy of her erratic mood swings as he is. You never know what she's going to do next, and come to realize she is capable of anything under that friendly exterior. Makes for nail-biting suspense.

At the heart of the book is something very personal for Stephen King: the power of writing. The book is about how Paul uses writing to keep his sanity. Over and over while the world crashes down around him, he takes solace in his fictional world to keep himself sane. It's a grand subtext that's even more powerful than the interaction between the characters.

Misery is an absolutely suspenseful story. It’s amazing how so much can happen without ever leaving the house. If you read only one Stephen King book, let it be this one. It's for the fans. 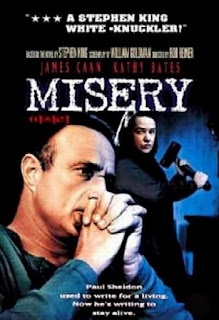 It's difficult to pin down why this movie feels so passive compared to its source material.

First problem is the casting. Stephen King adaptations have a history of brilliant villains, but horribly miscast heroes. (Running Man, anyone?) Kathy Bates shines as Annie Wilkes. She looks the part, sounds the part--she is PERFECT as Annie! The movie is worth watching just to see the character come to life through her. James Caan? He's so generic he's practically invisible.

Main problem: the film fails to capture the feeling that Paul is not in control. In the book, Paul is very subtle in defying Annie. He sneaks out of his room multiple times, he hides extra pills, he stashes food to prepare for Annie's next mood swing. Everything points to Paul walking on eggshells around her, and that he is completely at the mercy of her insanity.

The movie doesn't show much of this. Instead, there's a scene where Paul tries to drug Annie. He never does this in the book, and it makes Paul appear more confident than he should be. In fact, Paul isn't characterized at all in the movie. He IS invisible! His character is all but overlooked, while Annie steals the scene every time. This makes the psycho Annie Wilkes more real than Paul, and because of this, we don't get to know him in the movie as well as we do in the book. We don't fear Annie for Paul because we're not going through this with him. We're just casual observers.

The subtext is also gone. In the book, Paul uses writing to keep his sanity through this horrible situation. The movie leaves that out, simplifying the story to a basic struggle to survive. It takes away so much of what the story means, and who Paul is. Without it, the movie fails to get across that Paul is totally helpless, unable to escape or call for help, and he has no choice but to stay with Annie for months and write her book.

In the book, Paul eventually fears Annie so much he cowers in her presence. She breaks him without even trying, both mentally and physically. The movie shows Paul as fairly stable and sane throughout. Never loses his determination to get away. He never breaks. It's suspenseful in its own right, but it pales compared to the book.