Seek the original: How to Train Your Dragon

90% of everything Hollywood does is adapted from a book, or short story, or comic. Never settle for an adaptation. Seek the original! What did the author write? As the last person in the world to see the popular movie, I thought I'd read the book first...

Hiccup Horrendous Haddock III and eighteen other boys are about to be initiated into their Viking tribe. To do that, every Viking boy must steal a dragon directly from the nest and train it to hunt for him and obey basic commands. Then, on the initiation day months later, they will prove they have what it takes to be a Viking by forcing a beast as heartless and uncooperative as a dragon to obey. It’s the Viking way.

I’ve always wondered why books for young adults tend to have the same protagonist. Every kid’s book meant for boys I’ve ever read has this main character: physically lacking, nothing special, is often told he’s destined for greatness, always the target of bullies and teasing, and ironically the very thing he’s been teased for is what ends up saving the day. Then I realized something. What kind of preadolescent boy is most likely to read a book?

It’s obvious who this book is intended for, and because Hiccup fits the profile, it gives away the ending on the first page. He’s not a good Viking. He’s small, he’s wimpy, he’s not good at fighting, or yelling, or being a hero, and he’s powerless to stand up to the bullies who torture him for being what he is, but of course because it’s a kid’s book, you know where this is headed.

The boys nearly lose their lives stealing their dragons because Hiccup happens to have a friend who is only slightly less competent than himself, Fishlegs. (It’s he who wakes the dragons up, but for no apparent reason everyone blames Hiccup.) While fleeing the nest of waking dragons, Hiccup gives his dragon to Fishlegs because Fishlegs didn’t get one, and Hiccup goes back into the cave to fetch another one. It’s crazy, but Hiccup comes back with a dragon of his own. A tiny, non-threatening dragonette. He names him Toothless because he lacks teeth.

The bullies that inhabit this kid’s life are the usual type. They have names like Snotlout, Wartihog and Dogsbreath The Duhbrain. All they do is tease and mock Hiccup and his miniscule dragon. Their only motivation is to make Hiccup feel worse about himself than he already does because, frankly, he deserves it. I know I deserved it when I was a kid, but I didn’t know I deserved it until High School, when I grew up and stopped being so awkward.

Hiccup himself knows he deserves it for not being tough, strong or a fighter--three things every Viking should be. His miniscule dragon sure isn’t helping. How is a dragon the size of a housecat, and without teeth, going to earn him entry into his tribe? Furthermore, the only advice he gets on how to train a dragon is to yell at it, which he can’t do either. Hiccup tries everything he can think of to get Toothless to obey, but the tiny dragon refuses to listen. Dragons are heartless and have no sense of gratitude, unlike dogs, so his situation is hopeless.

But Hiccup does have one trick up his sleeve. He can speak Dragonese. Yes, Hiccup has been watching dragons since he was even younger. He knows a lot more about them than the average Viking, and somehow he can speak their language. There’s no explanation for how he acquires this ability, so just go along with it.

Dragons apparently love jokes, and Hiccup is able to use this as the proverbial carrot on a stick to get the dragon at least to feign obedience. “Catch me a fish and I’ll tell you a joke.” It works, though Toothless whines about it the whole time.

Then a seadragon, big as a mountain, crawls up from the ocean floor and perches on the beach, ready to eat everyone in the clan. Yelling at it doesn’t work, it’s too big to fight, they can’t run away, they’re as good as dead.

But wait! The nerd can speak to dragons! Of course! Adults are only capable of indecisive bickering after all, so the kids will have to save the day!

Uh oh…talking to the massive dragon doesn’t work. Now it’s up to Hiccup’s booksmarts and cunning to outsmart it! Naturally, the bullies are reduced to taking orders from Hiccup, and Hiccup and Toothless are heroes!

It’s what every kid reading this book wants to believe will happen, and it’s what parents and teachers tell them, too. Sure, you’re being picked on now, but one day your brain will make you a success, so don’t listen to those bullies. You’ll have the last laugh eventually. That’s what this book is all about.

Toothless is fairly useless throughout the story because he is, of course, a heartless dragon. He’s the size of a housecat and lacks teeth, so there’s very little he can do except chase mice and catch fish. Mostly he whines about his wings being tired, or how he doesn’t feel like hunting today. But at the end he has a change of heart and he flies in to rescue Hiccup in his moment of need.

It goes against every hint of logic the book establishes! Why does Toothless decide to be selfless now? Instead of providing a good reason, the narrator simply breaks the fourth wall with “who knows why Toothless had this change of heart. Maybe it was this, maybe it was that, maybe we’ll never know, but he did.”

I wanted to know. Maybe a future book in the series answers this question, but it doesn’t feel like a cliffhanger. More like a shortcut to get to the conclusion. I’d sure like for Toothless to have been a real character with some development, instead of just the pet.

I respect this story because Hiccup is an active main character. Unlike a certain boy in a certain wizard school, Hiccup takes action. He knows things that will win the battle, he influences the events, and he takes charge. He deserves to be the hero, and earns his place in the tribe.

I’d still like to know how he came to know Dragonese though. Seems learning about dragons in general is frowned upon in Viking society, so how could he possibly learn how to talk to them? Oh well, it’s for the kids, and owning a dragon for a pet is something every little boy would get all giddy thinking about. It also has all the things little boys find funny: underwear, snot, burly men reduced to dressing in women’s clothing, boogers, and exploding heads! A good read if you remember its intended audience. 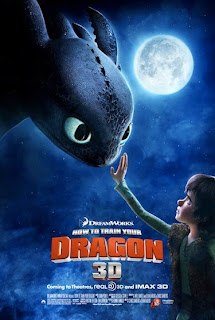 How to Train Your Dragon (2010)
by Dreamworks Pictures

There are rare occasions when the movie adaptation turns out even better than the book. I want to say this is another one, but...can this be called an adaptation?

In the book, every Viking's duty is to learn how to train a dragon as part of becoming a full member of the tribe. In the movie, all Vikings have a duty to learn how to kill dragons and defend their village.

In the book, dragons speak their own language. In the movie, dragons don't speak at all.

Hiccup himself is not a preadolescent boy. He's a teenager. He's still awkward and clumsy and as non-viking as anyone can get, but he's a totally different character.

Toothless is not the size of a house cat. He's as big as a car, has teeth, and doesn't speak.

The bullies are no longer stereotypical, whiny kids who mock Hiccup just because he's Charlie Brown, er, uh, Hiccup. They're other teenagers who are also learning how to fight dragons, and they mock Hiccup because his screwups almost get them killed. They actually have a good reason to hate him.

The book is about kids training dragons. The movie is about Hiccup's discovery that dragons do not need to be killed, and can even be tamed. The movie and the book have nothing in common besides the character names and the basic setting. Makes me wonder why this is considered an adaptation. But I don't mind because the movie actually tells a stronger story.

In the novel, Hiccup can speak to dragons, but it doesn't tell us how he learns to do this, or why. This ability doesn't even have much of an impact on the story, seeing that Toothless is essentially useless for most of the book and talking to the seadragon doesn't get Hiccup anywhere. But because he's read a lot of books or something, Hiccup knows everything about dragons and his booksmarts are what save the village.

The movie, however, shows us how he learns so much about dragons! It's the movie's focus! Hiccup learns about them by being nice to them instead of killing them on sight! Because Hiccup is doing things differently from the Viking way, he figures things out that no one else knows, and this is what saves his tribe! It makes me wish the book had approached the story from this angle!

The book comes across as juvenile, with its frequent snot and underwear jokes. The movie removes all of that and replaces it with a very mature story about standing up for a new way of doing things and proving your way is better, even though tradition is against you.

But the adults aren't completely useless (as in the book), just misinformed. Because we see why the Vikings were wrong about dragons, we respect Hiccup for going against the Viking tradition. The movie shows where Hiccup's knowledge comes from, and why his way is right, so he earns the privilege to be put in charge and save his village.

In the book, Hiccup is given this role just because he's the kid who happens to talk to dragons and he knows everything about them. It comes across as pandering to the preadolescent male bookreader (i.e. the young nerd), telling them what they want to hear, that being nerdy is okay because someday their booksmarts will make them heroes. The movie portrays Hiccup as a boy who earns his dragon knowledge because he's different from what a Viking should be. He's not just a wimpy, nerdy kid. He's the first Viking to investigate dragons instead of kill them.

In every possible way, the story became better as a movie. Watching Hiccup research dragons is way more interesting than reading about Charlie Brown, er--Hiccup trying (and failing) to train a whiny, selfish dragonette. It's everything the book should've been.
Labels: How to Train Your Dragon review seek the original