Roommate calculated he's pulling an average of 68 hours a week at work. It's physical labor. Very difficult work. It's taking a lot out of him. But it's good money.

I'm just now back up to earning a living wage, but my hours can be cut at any time. There's no security. No stability. 30+ job applications over the last six years. Three interviews. Still can't get out. I'm glad I have a job and I've held onto it, but man. The job market is tough. It's not as simple as "just get a better job," contrary to people thoughtlessly saying it is.

It used to be. Wake up to the new economy. Businesses are profitable again because they've cut back on their workforce enough to be so. Now they realize they can function just fine without those extra jobs, forcing their remaining employees to do more work for no extra pay. The economy will not return to the way it was before the crash of '08, unless something big changes.

Is this what it takes to be self-sufficient? You have to work so much you have no other life? Is this the glory of hard work? Just keep working! You'll prosper! You'll be rich! All you have to do is keep working! Only people who have never had to work hard would ever glorify it.

Fuck, we accept this as the way it's meant to be? Once upon a time, a person could support a family on just one income. These days it takes two and three incomes to just barely get by! With few exceptions, both parents have to work full-time to support themselves and one kid!

Why have we simply accepted this is normal? Employment is said to be a choice, and yet we are all required to earn a living. Is it really a choice? Are we really free? 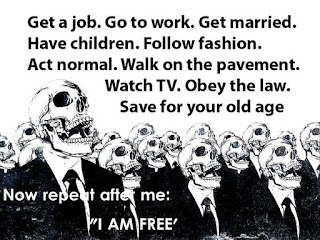 Notice when Capitalism took off in America? After the civil war. Or, more accurately, after slavery was abolished. Once America no longer had its supply of cheap labor, slavery was expanded to encompass everyone.

Ever wonder why Americans don't organize and protest very much?--why we seem so complacent? It's because we have to spend so much time working! We can't say or do anything that might take us away from our jobs because we're terrified of losing them. It's the ideal way to control a population so they'll never overthrow the current system: keep them so busy they won't have time to think, let alone act! I don't believe it was planned this way (no conspiracy theories here), but it seems to be what happened.

Hard work is not worth glorifying. It's just work.