93.2% of everything Hollywood does is adapted from a book, or short story, or comic. Never settle for an adaptation. Seek the original! 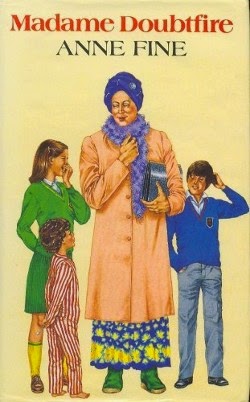 Daniel Hilliard has been divorced from his wife, Miranda, for a couple years. He's an actor, so he's frequently unemployed. He just got a job doing nude modeling for an art class, but that's been his only regular job for some time. His wife, meanwhile, runs a business, and is always at work. He only gets to see his children every other weekend, and every Tuesday for tea.

But lately, Miranda has been passive aggressively shaving time off his visits. Showing up early to pick up the kids from their father's apartment. Showing up late dropping them off, robbing Daniel of precious time with his children.

So Daniel does something drastic: he responds to the ad his ex-wife takes out in the paper for a housekeeper. Disguising himself as a woman named Madame Doubtfire, he applies for the job, and Miranda is so impressed she hires him on the spot.

Before he's even hired, he tells his three children who he is, and now he gets all the time with his children he wants.

Daniel doesn't lose custody of his children. He still sees them often enough, so why does he feel the need to disguise himself as a woman and take the job as his ex's housekeeper? All because Miranda is shaving a few minutes off his teatime and weekend visits? He needs child support money? That's not a big enough of a problem to merit such an extreme solution.

Furthermore, once he is Madame Doubtfire, working in his ex-wife's home, it's not really that big a deal. It makes sense he would let his children in on the act so they really could spend time with their father, but nothing of consequence happens because of this.

There are a couple seeds of ideas for how his disguise as Madame Doubtfire could have become a crucial plot development. Only once do we hear Miranda talk about Daniel and the horrible things she had to endure since the day they were married, and this could have been interesting. Daniel could have used Madame Doubtfire to figure out why their marriage fell apart, gaining a new perspective on things and finding a way to turn things around. That would have been a perfect way to use this disguise!

But this idea is unused. In fact, it succeeds in making Daniel look like a real jerk. For example: on his and Miranda's wedding day, there was a girl out in front of a grocery store giving away kittens, and she only had one left. So what does Daniel do? He cuts away from his wedding, fetches the litter his own cat just had, dumps the whole box on the girl and flees. He just gives her another litter of kittens to try to give away. In the rain. That's not funny. That makes him a real asshole.

Daniel is not a very likable person. Neither is Miranda. One has to feel for the children, caught in the middle of this, and that's what the book is about. Digging up these buried fights and bringing them to the surface. Nobody had the courage to outright say these things before, but somehow discovering her husband is Madame Doubtfire gives everyone the courage to speak these things aloud. Once the anger and resentment is out in the open, peace is possible.

But again, the whole Madame Doubtfire thing is barely necessary. Daniel says he never would have been driven to such an act if not for Miranda robbing him of his time with the kids, but it's totally uncalled for. He still sees his kids. There were a thousand better ways to deal with it. The whole business of disguising himself as Madame Doubtfire is underplayed for the absurdity of it all. The whole idea is so drastic, and it serves such a small role in overcoming a problem that is so simple.

He could have used Madame Doubtfire to understand why the marriage failed, but he doesn't, and hearing what his ex really thinks of him has no impact on him. One would think gaining a new perspective on himself would stimulate him to try to curb these behaviors, but he does not.

So much more could have been done with this idea. It needed a bigger reason to justify it, and it needed to draw more attention to the consequences.

A lot has changed. Some for the better, some for worse.

Instead of opening a couple years after the divorce, we now see the divorce as it happens. Daniel has a much better reason to disguise himself as Mrs. Doubtfire: his wife convinces the judge that he is an unfit parent, and can't see his children.

He loves his children so much he can't stand to be apart from them, so he gets his makeup artist friend to make him a disguise so he can take the job as his ex's housekeeper. He gets the job, and now he has to deal with close-calls, the hazards of being a woman, and staying in character for weeks at at time, plus holding down a day job as janitor at a studio.

Daniel is now a voice actor, but he isn't as mean with his humor, which makes him much more likable, but he makes a questionable decision in the movie that he does not make in the book: he does not tell his children that he's Mrs. Doubtfire. They have no idea until close to the end that she's him, and this makes no sense. If his goal is to spend time with his children, why shouldn't he let them in on the ruse? If his kids don't know it's him, how is that spending time with them? The book makes more sense in this regard because they're in on it from the beginning, and they really do get to be with their father.

In both the book and the movie, the ruse falls apart when Daniel tries to be two people in the same place at the same time. The movie's reveal is much more interesting than the book because it happens in a public place. The consequences are bigger, and that's as it should be. Something this drastic deserves to have a huge impact. In the book, it barely changes anything.

The book ends with Mrs. Doubtfire's clothes in the trash, gone forever. The movie ends with Mrs. Doubtfire being used as a character of a new children's show. That'd kinda cool until you think about it. It would be like if Mr. Rogers turned out to be a woman dressed as a man. Would that sit right with any parent once word gets out? Would a studio take that risk? I doubt it, but it's a cute idea.

The movie ends with the possibility of the family getting back together. It's a nice ending note, but as someone who has seen that tried, I know it rarely works when two people get back together after a split. You think things have changed, but they never have. I actually prefer the book's ending. There's no hope of Daniel and Miranda getting back together, but there is hope things will be more amiable.

Overall I think the movie is better than the book. It takes the idea and gives it a bigger reason, with bigger consequences. It's the focus of the story now. But even the movie makes a few changes that hurt its case. Robin Williams' performance sells the whole concept, and it's worth seeing for that alone.


(Thanks to Renee Carter Hall for letting me have her copy of the book.)
Labels: Mrs. Doubtfire seek the original