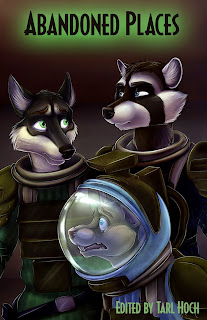 After a long wait, it's finally coming out. Abandoned Places, edited by Tarl Hoch. My story is...


The Cable
By James L. Steele
The rat's eyes had always been open, but until right now he had never seen a thing. There was a light hanging over him, bright white, but also streaked and speckled with red. The rat blinked. He became aware of his arms and legs. Something digging under his fur and into the skin beneath. It smelled... The rat instinctually took sharp breaths through his nose. The straps holding him down smelled organic, like they were once alive but now were not. In a room full of sterile plastic, metal and brick, their scent stood out.

He tried to lift his left arm. It was held down tight and remained firmly pressed to the padded table. He raised his right arm. It was free to move. He raised his arm over his head and looked at it. Short, brown fur. Long claws tipping long, bony fingers. His arm was all bone and fur.

The rat raised his head slightly. It was free to move and he sat up as far as he could. The light was in his eyes no matter which way he turned. He held his hand up to block the glare and tried to look around, but the light was so intense he couldn't see anything beyond the table.

He had an impulse to reach out towards the light. The rat reached into the beam. His claws collided with glass, making a light chink sound. At first he didn't know why he was doing this, but quickly something occurred to him. Something he knew unconsciously. He groped the light fixture, felt around it, fingers moving from a hot glass surface to a cool plastic one. Eventually he felt something he recognized. He twisted the piece of plastic.

The light shut off. The room dimmed, lit only by the softer overhead lights. He blinked the spots from his vision. It took a few minutes for his eyes to calm down. Finally he was able to look around him and confirm with his eyes what his nose and sense of touch had already told him.

He was strapped to a padded table in a very sterile room. The wall ahead of him was stone, painted white. The ceiling was metal. He looked down at the floor. It was tile, covered in blood. The rat looked side to side. The walls on either side of him were also crimson, but the blood was dry and cracking.

He leaned forward more, trying to sit up. Something tugged the back of his head, resisting him. The rat reached behind his skull and felt it. A piece of plastic was firmly attached to it. The rat felt it all the way around, but he couldn't identify it. The thing was long, flat and joined to a long cord extending backwards beyond his reach.

Suddenly his ears woke up. He became aware of the regular beeping coming from behind him. The rat's ears swiveled in the direction of the sound, then his head turned with them.

Out the corner of his eye the rat saw a terminal. On the screen were lines moving from left to right. The beeping coming from the machine matched one of the lines. This line matched the beating in his ears.

Another impulse kicked in. He leaned forward. The cord attached to his head tugged him backwards, trying to retract, but the rat resisted and forced his head forward. He opened his muzzle and gnawed on the strap. This felt quite natural. Satisfying in a way. He bit and chewed the strap, tearing fur out of his arm--the mechanical beeping sped up as he panicked and gnawed and thrashed.