Jurassic World, pretty good but more of the same

Jurassic World (2015)
starring Chris Pratt
Well, the consensus wasn't too far off. It wasn't a bad movie, but none of it really means anything. They tried to give the human characters some personality and history, but there's not enough of it to remember any of their names.

On the car ride home, all my group had to say about it was "it was good." Then nothing more about the movie was spoken because it was, yeah, pretty good, but... Just... That's it. Just another survive-the-monster story we've seen a thousand times. The original Jurassic Park was no better, but it could ride on the newness of its special effects. Jurassic World cannot, so it's just one of a hundred CGI blockbusters in recent memory.

What's the plot? Man creates new hybrid species of dinosaur to please the crowd, it gets loose, and now the heroes have to survive its rampage. Not too different from the last three movies, but I didn't expect any different.

I like Chris Pratt's character. I like the idea of someone having a relationship of respect with the raptors like one would build with a pride of lions or a pack of wolves. That was used very well. 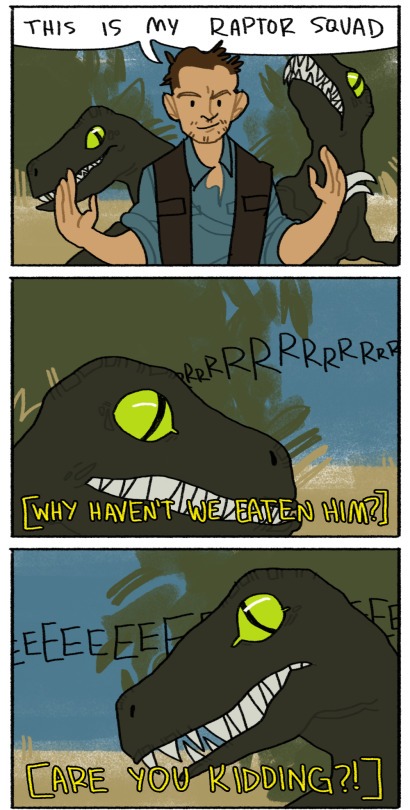 
I like our female lead luring the T-Rex to the final battle. She goes from "useless-female-love-interest" to "courageous female lead" with that one decision, and I like that.

I like the idea of making a new species of dinosaur just to draw in more crowds. Mixing different dinosaur (and modern animal) genes purely to produce visual effects, but ignoring the behavioral problems this will cause is something I can totally imagine Ingen doing, but you'd think they would have made their hybrid look cooler. Add spines, add a bizarre scale pattern, give it spikes on the skull, make its claws as long as its legs--go nuts making it look amazing and terrifying! The geneticists in the movie certainly would have, since the goal was to exaggerate the predator traits for spectator awe, so why does it look just like a T-Rex? Sorry, but it is not terrifying. It does not even look unique!

Four screenwriters, and none of them thought to make the new dinosaur behave less predictably due to its genetic makeup? It doesn't really do anything different from any of the other species of dinosaur they have, and the story could have shown far more surprises to put the heroes in more danger. That would justify why this dinosaur is so hard to kill! In the movie, the only reason nobody can kill the hybrid is because it causes so much damage nobody can aim their guns at it long enough to put it to sleep. It's pretty contrived. Making it behave in more unpredictable ways would have gone a long way to personify the danger of tampering with life for the sake of profit, and the unexpected consequences.

The screenwriters could have gone the opposite direction with this. Jurassic World makes a bizarre chimera of dinosaur traits, portrays it as a fierce predator to the crowd, but behind the scenes the animal is constantly sick, can barely walk, and sleeps 18 hours a day because its metabolism is not fast enough to support its bulk. That would have been a bold, poignant direction to take the idea.

There could have been a lot more story in this, but they settled for tried-and-true, rampaging dinosaur action. For that, it's pretty good. The final fight at the end is very well-done, bringing multiple species into the battle for a cooperative fight against a common enemy. They really did make these fights unique. It's on par with the original, but since the special effects are not innovative anymore, it doesn't have the same impact.

Of course, Michael Crichton's original message about the danger of science advancing ahead of safety for the sake of profit is lost on screen. The message is more relevant than ever, and it needs to be presented as more than just a monster movie plot.

Most movies these days do everything halfway. They have some good ideas, and they don't develop them enough! This has been a complaint of movies for years: focus on the visuals, not the story. I think we've reached a point where we want the action to mean something. VFX don't stand on their own anymore. They need story to support them.

*
How the hell did those kids get the old Jurassic Park vehicle to work?! At least 30 years to rust and rot--the tires should have been shot by then, plus the fluid systems rusted through. And surely central control would have been able to take remote control of their gyrosphere and prevent them from leaving the perimeter like that.

Wait, um, how close was the T-Rex exhibit? Would they really put it right next door to the visitor's center??

...what was the purpose of putting those raptors in headcages? And how do you get a raptor in one??

And boy, there were a lot of product placements in that movie, and they were distracting. The movie comes so close to making fun of how ridiculous sponsor-naming has become, but of course it only goes halfway because the filmmakers couldn't upset the real sponsors. I totally dare some company to put its name to the next dinosaur that slaughters a few thousand people. Or better yet, let's name some killer dinosaurs after companies who deserve it: Monsantosaurus, BPosaurus, Microsoftodon, Exxonodon, Comcastosaurus, Dowodon. We could have fun with this!
Labels: jurassic park jurassic world review