Seek the Original: Planet of the Apes

Planet of the Apes
by Pierre Boulle
A few scientists and a journalist (Ulysse Mérou) embark to the star Betelgeuse, traveling on a craft to just under the speed of light. They make the trip in only two years, though hundreds of years pass on the Earth they leave behind.

On Soros, the habitable planet they find, they discover it is inhabited by humans. And simians. The humans live like animals, while the apes have an advanced human civilization. Ulysse is captured and subjected to behavioral tests. Two of the others are killed, and the last loses his mind.

For months Ulysse is locked in a cage, suffering embarrassingly easy tests he's seen primates endure back on Earth. Eventually he is able to tell his warden, a chimpanzee named Zira, that he is intelligent. After learning her language and gaining both her and her fiancé's trust, he makes a speech to the high counsel, and is released from captivity. He is now free to pursue scientific research as their equal, despite him being a journalist by trade. 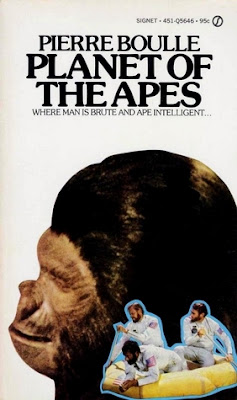 I guess there's nothing wrong with this story, and perhaps it was innovative for its time, but I can't help thinking Jonathan Swift did it better in Gulliver's Travels. The country of the Houyhnhnms and Yahoos was essentially the same thing: switch the human and animal, and try to expose human civilization for what it is.

Planet of the Apes is hardly original in this respect, and the first 2/3 of the book is all about Ulysse trying to convince the apes that he is intelligent as they are, and it's a drag. How does he earn his freedom? He makes a long speech to the leaders of government, and the people in attendance. Just like that, they release him from captivity and now he's a full member of ape society. No, that's way too easy. If, on Earth, a captive elephant suddenly started speaking and pleading to be accepted as one of us, there would be no way a simple speech to congress would convince everyone to let him walk among us as an equal.

The book only becomes interesting for the 20 pages we examine the origin of the ape civilization, and the fall of man's on this world. The way they learn about it is ridiculous: stimulating the brains of a pair of man-animals (sorry, I had to), the apes are able to get them to speak "species memories." Somehow memories of what happened to their civilization ten-thousand years ago are contained in these humans' minds? That's not how memory works. It's ridiculous--easily solved by finding old recordings, or movies, or diaries from the ruined city--but the information is interesting. Apparently, the apes are not intelligent at all, but simply imitating the human civilization that came before it. It left me wanting to know more about that, not Ulysse's long journey out of captivity.

It doesn't last long enough for me to call the book a good read. For as short as it is, it's hard to get through because so much of it is dull. I wanted to know more about the rise of the apes and the fall of man, how humans and apes got to the planet Soros in the first place, and it bugs me these subjects are pretty much footnotes. That's where the real satire of human society was, and it was the point where the story broke away from Swift's work and stepped out on its own. Like a toddler, it only took five steps, teetered over and fell on its diapered bottom, cried for a while and then curled up and called it a day.

It's pulpy, barely any science, and has all the tropes you'd expect of a pulp sci-fi adventure. For example, all the women are beautiful, and walk around naked. It also has a twist ending I saw coming from before the halfway mark. How did apes get to Earth? How can we ponder that when we don't even know how they got to Soros in the first place!? I didn't hate the book, but the interesting parts did not last long enough to make me like it either.

Now compare that to...


Planet of the Apes (1968)
starring Charlton Heston
This was my first time seeing this movie that I can remember. It's a classic and was quite a blockbuster for its time, but I didn't care too much for the movie either.

For starters, what's up with the music?! For the first 20 minutes, the music draws so much attention to itself. The orchestra panics several times, but nothing is happening on screen. It's as if the music is trying to compensate for what's not happening. Calm down, soundtrack, they're just climbing the rocks. (Uh oh...) Once action actually does start happening, the music finally matches the movie, and by the end it adds to the scenes instead of jumping off the screen and assaulting the audience.

Second, our main character (named Taylor in the movie. Because this is an American movie, so no Frenchmen are allowed to be important) is an asshole. He doesn't come across as a leader, but a jerk. What kind of performance were they going for here? When one of the crew makes a little memorial for Stewart, their crewmate who died in the crash that stranded them on this planet, Taylor laughs at him. His laugh doesn't sound light-hearted, but like a man who is going insane! He insults his crew every step of the way, he talks down to them--why is this guy the main character!? At least Ulysse in the book is a vulnerable everyman and you can kinda feel his pain. (Though he is overly-eloquent. The dialogue in the book sounds leftover from the Victorian era, but that may be the result of the translation from the original French.) Taylor is just a self-righteous dick.

Third, the main story is our protagonist trying to convince his ape captors that he is intelligent, just like the book.

On Rotten Tomatoes, the consensus is that this movie "raises thought-provoking questions about our culture without letting social commentary get in the way of the drama and action." What questions? What social commentary? The book had more of those than the movie, most of it narration that wouldn't be easy to show. The book doesn't do too much with it, but it's still there. I don't find any of that in the film.

It gives a lot of hints as to the origin of apekind, and the third act shows some evidence of it, but this isn't the focus of the movie. Instead, the movie puts Taylor on trial, and it wastes so much time debating the obvious instead of exploring the more interesting idea. 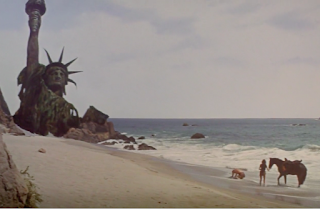 We all know the ending. It's the most parodied scene in cinema history. Taylor rides up the beach and finds the ruins of the Statue of Liberty, so he was on Earth the whole time. Ape civilization rose out of the ruins of his own.

But wait... The astronauts left Earth. They were traveling at the speed of light--they were already hundreds of light years away from Earth at the start of the film, and over 2,000 years had passed by the end of their journey. How did they get back to Earth?! The book's ending makes more sense, even with the unanswered questions. The movie's ending is a twist for the sake of a twist.

There's all this talk about how the apes must protect the faith, how Taylor is a threat to their civilization, despite his assertions that he is from another planet and thus not related to events on their world at all. What faith? How is he a threat to them? Taylor himself asks this, and no answer is given.

In the book, Ulysse and his ape colleagues uncover an ancient city of humans who were even more advanced than the apes, and Ulysse puts the pieces together: the present ape society is merely imitating the ancient human society, and each generation has taught the next for thousands of years. It explains why nobody innovates, why nothing has changed in centuries, why things work the way they do. It is all they have been doing, and it implies they are not intelligent at all. This knowledge is what must be covered up, and why Ulysse is such a threat to their social order.

The movie doesn't explain this at all. In fact, the apes in the movie believe they were divinely created. Not so in the book; they know they evolved from something, but they don't see their civilization for what it is. It's interesting stuff, and it's what both the movie and the book should have focused on. This is the satire--this is the social commentary!--but instead they both waste so much time being about Ulysse's and Taylor's escape from bondage.

Had the movie drawn more attention to the nature of ape civilization, perhaps the twist ending would have had more weight, but it still doesn't make sense. How did man's civilization end? How did apes survive, and nothing else? There's no attention to these questions. Perhaps the reason was more obvious in the 60's. During the height of the Cold War, the very idea that we could destroy ourselves, and someone else would rise up to take our place, was an idea that stood on its own. Nobody needed to know how mankind destroyed itself; it was obvious somebody used the Bomb.

That's fine, but the movie isn't about that. It's about our main character trying to persuade his ape captors that he is a thinking person just like they are, and he's such an arrogant jerk before his captivity I didn't want him to be free. I wanted the movie to be about the rise of ape civilization and the fall of whatever came before. It isn't, and for this reason I prefer the book over the film, because the book answered some of these questions directly, which was interesting, even if it wasn't enough.


*
From a filmmaking perspective, the ape makeup is amazing. It's pretty convincing, even today, and must have cost a fortune. The sets are large and do a great job standing in for an entire civilization. The music is terrible, and is a huge distraction from most of the movie.

It's a classic of filmmaking. I respect that. I recall the subsequent sequels (remember those? This was a freakin' franchise in the 70's!) delved deeper into the ape civilization, and also into what happened to man's. People in the 60's wanted to know more, too.
Labels: planet of the apes seek the original