Seek the Original: The Big Short

91% of everything Hollywood does is adapted from a book, or short story, or comic. Never settle for an adaptation. Seek the original!

The Big Short
By Michael Lewis
A jaw-dropping, no-nonsense account of what led up to the financial collapse of 2008 and the recession that followed. Anyone who wants to blame homeowners for taking out mortgages they couldn't afford, or government rules that required banks to give mortgages to people who shouldn't have them needs to read this history of the subprime mortgage scheme straight from the mouths of those who were there when it happened.

Here's a Wall Street guide to making lots of money:

1) take mortgages, package them into bonds and sell them to investors on the open bond market as Asset-Backed Securities (ABS)

2) take the worst of those bonds and package them into Collateralized Debt Obligations (CDO).

3) Use your clout to convince the ratings agencies to assign these CDOs the same rating as US Treasury bonds to make them appear as sound investments. 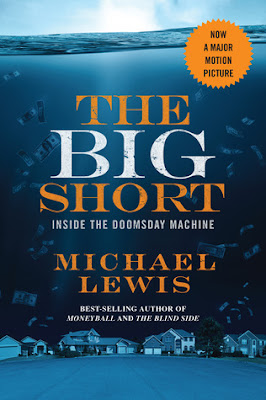 5) To keep up with demand, give lots of loans to people who don't deserve them. Housing prices are going up, so tell the borrowers (would-be homeowners) not to worry if they can't make their payments after the interest rate goes up; they can simply refinance and use the new value of their home to pay the principle.

6) Reap even more rewards off the fees for refinancing.

7) Package the loans, sell them to investors, and then sell more insurance on those assets! Home prices are perpetually rising, so you'll never have to pay up!

It went on so long, and prices kept going up for so long, that people never thought they'd fail. The people running the largest banks genuinely believed the ratings on those assets, that they were riskless. Everyone was making so much money off this machine, and it never seemed to end.

The book tells the story from the point of view of some of the men who saw the collapse of the subprime mortgage industry coming, and bet against it.

It is an infuriating read, and that's what makes it so good because it's what was really going on behind the scenes of the financial collapse--cutting through all the speculation and political spinning. It's nothing I haven't read before in news articles and such, but this collects the details in one place and it puts the whole thing in perspective. Wall Street did not see it coming. They had no idea what they were doing, what those bonds were, what the CDOs were, or anything. The banks went out of their way to bury that information because the products they were generating were worth so much, and making so much profit for everybody, as long as everybody believed they were bulletproof. The brokers didn't know what these things were; the CEOs didn't know; the traders didn't know. It was deliberately complicated for the purpose of masking how risky the bonds and derivative products actually were.

They should not be allowed to do shit like this unrestricted, but they can and they will do it again, knowing the government will be there to bail them out for their mistakes. They were bailed out, but the homeowners were foreclosed and laid off. The people responsible for the financial crisis walked away rich. I read entire chapters with my jaw in my lap it's so absurd and enraging.

It should be the definitive guide to what the hell happened in 2008. We sure couldn't tell then, but now we know what those bastards did to us, and they still get Fox News to blame the government for putting too many restrictions on the market, and the homeowners for being irresponsible. The Big Short shows that apart from the Fed's decision to keep interest rates low for so many years, the government had nothing to do with it; Wall Street did it to itself. They played games with the money system, exposing their own firms to outrageous risk, made the taxpayers and shareholders pay the price, and walked away rich. Those financial institutions deserved to collapse. They should have. Perhaps it would have given something better a chance to rise up in its place.

This book makes me so angry, and I loved it. Don't read it expecting great characters. Don't read it expecting to identify with what's happening, or root for the underdog, or cheer the fall of the villain. Read it to get a grip on what happened in 2008, and just how ridiculous it was. Nobody knew what hit them, even the people on the inside. Now we do, and we are pissed.

The Big Short
starring Christian Bale and Steve Carell
Considering the filmmakers had to make something as uncinematic and uninteresting as mortgage-bond derivatives engaging to an audience--and considering they also had to get the audience to identify with hedge fund managers betting against the mortgage industry, it does a very good job.

Really, how is the audience supposed to feel about these people? Bunch of guys who are already rich trying to get richer? Like, why bother? For the typical moviegoing audience, these people are all nuts. They inherited, they got money from a lawsuit, or something, enough to set them up for life, and all they want to do is start a business investing other people's money (a hedge fund)?

But much like the book, the people are not really that important. What's important is to communicate just how absurd the subprime mortgage bond and derivative market had become. It's so ridiculous and outrageous, and watching how these hedge fund managers react to it puts us on their side right away. The visual aids and narrative asides and narration all work very well to tell this story.

I'm impressed most by Steve Carell's performance. He is playing against type here, and he does such a good job as Mark Baum. The film's only true belly laugh, for me, was watching him in a strip club talking to this topless stripper about her mortgages! It shows exactly who these people are, and what motivates them.

Christian Bale's performance as Mike Burry is also striking. He, too, is unrecognizable as this socially awkward man struggling against challenges that are very difficult for outsiders to grip. The stressful world of hedge fund managers... investing other people's money... how do you get across something as undramatic and nonvisual as worrying about an investment? He does it well, though the filmmakers totally failed with the glass eye thing. Mike Burry has a glass eye, and it's established at the beginning of the movie, and yet Mike's eye moves normally all through the movie. Why bother establishing it if they weren't going to show it?

All the players in the movie make a lot of money, and though the motivation for why they want to make more money when they already have more than enough is totally lost on the audience, the one thing pulling us through is learning just what the banks did, the stupid risks they took, and how clueless everyone was about the whole thing. People were too busy making money to realize it.

In the end, they get rich, but nobody feels good about it. Baum's misgivings about what they had done may or may not have been what the real man thought, but it does give the movie's events a poignant point. Steve Carell's character says it best at the end: there was a time when fraud didn't work. Things always go South eventually. When the hell did we forget that? Now here we are... The people who perpetuated this mortgage scheme walked away rich while the homeowners were foreclosed, and none of it was illegal. In light of all this knowledge for why the banks were in such trouble, the bailout seems stupid. Why would we want to bail out these smug idiots??

Be angry, people. This is why we're in this mess--not because a bunch of irresponsible poor people tanked the economy, or because the government put too many regulations on banks and forced them to give loans to people who didn't deserve them--but because a bunch of Wall Street people stuffed portfolios full of risky mortgages, sold them to investors as AAA bonds, repackaged the worse of those mortgages as a different sound investment, sold insurance on those securities, and then got taxpayers and investors to bear the risk while they themselves got rich.

It should be a call to arms about the necessity for regulation and proper oversight. It should be a revelation that we cannot trust people acting selfishly to do the right thing for everyone. What's best for a company as a whole (to say nothing of the economy) isn't always what's best for the individual. What happened in 2008 should be the swan song for Ayn Rand's ideology.

Instead, banks are more powerful than ever, and large corporations have even more control of the government than before the crash. It's starting all over again. The theater in which I saw this movie was empty. The 2008 mortgage crash is one of many topics people still aren't angry enough about.

I applaud Adam McKay for making a movie out of this. It should have been a cinematic disaster, as it's little more than people talking on cell phones and in small offices about the mortgage-backed security, but the sheer absurdity of it all is more than enough to keep the audience's attention. It's a good adaptation of a nonfiction book about real events and the real people who were part of them. I wouldn't call it an entertaining comedy though. It's a movie with a message, and it succeeds in getting its message across, despite the likes of Fox News trying to shift the blame and convince us everything is just fine and nothing needs to change.
Labels: seek the original The Big Short