Another call for universal healthcare in the US

I'm on record singing the praises of the Affordable Care Act (Obamacare), and I take back none of those words, as I meant them at the time.

However, the course the program was on has not stayed true. Creating a level platform on which insurance companies must compete was supposed to encourage competition and thus reduce prices over time. Instead, the insurance companies have responded by merging. Insurance is required by law, and there are now fewer companies competing for customers, so industry has an incentive to collude and keep prices high. When they do that, they can then use losses as an excuse not to offer plans, even though the company as a whole is still profitable. If this is allowed to continue, the ACA will one day only offer crap plans for high rates, effectively killing it. They aren't even giving it a chance to work over the long term; they're reacting to losses now instead of giving it time to even out, likely because they don't want prices to go down.

My employer raised the threshold to qualify for their health plan from 23 hours/week average to 32, so after being kicked off my employer's plan for a year, my experience with the ACA was positive. Rates were good back in 2014, and my income was low enough I qualified for a subsidy, which meant I got an even better health plan for less than I was paying for my employer's.

Now, however, I make too much to qualify for that subsidy, and yet I still can't afford the rates for the good plans. The following year, I needed a stopgap insurance plan for a couple months until my employer's covered me again. I could no longer afford the plan I was on because premiums and deductibles spiked. I'm on my employer's plan again, but rates continue to rise as care continues to fall, and it's one of the good plans. Things have only gotten worse on the marketplace.

Recently I went to the doctor for a health concern. Needed an ultrasound and a visit to a specialist. Without insurance, just the office visits and the one test would have cost me over $2,000. With insurance, my cost was about $400, and they could find nothing wrong. 400 dollars I had to pay for nothing. It's better than going without insurance, but still! Healthcare bankrupts us even with insurance. I would like to go back and find out what's wrong with me, but that will require more tests, more visits, and more money. Even after I meet the deductible, insurance only pays 80/20 up to my out of pocket maximum. It's not worth going in unless it's for something dire. Otherwise, you're just wasting money.

Obamacare--the ACA--only requires people to have health insurance, and insurance companies to stop turning away people who need it. It should have made it more affordable by bringing more people into the system and creating a level platform for companies to compete for customers, but that's not what's happening. The root of the problem remains: our nation's healthcare system is for-profit, which means prices will always go up while quality of services goes down because investors and executives demand more profit.

What is the point of healthcare if nobody can afford it? What is the point of having the most advanced system in the world if it bankrupts even the people with insurance and we have to live our lives afraid to go to a doctor? The good plans are still with our employers most of the time, which makes us terrified to leave our jobs.

From the beginning I said the main thing I don't like about the ACA is that you have to take your employer's plan if you qualify, or lose the subsidy. It tethers us to our jobs more than ever now. Since health insurance is required by law, a lot of people have to sign up for temporary plans if they are between jobs, or if they criss-cross the cutoff point for their job's plan, as I had to. Having so many people hopping plans cannot be good for the system, and it would be so much more efficient if we could stay with our ACA plan despite what our employer offers.

More and more people are getting tired of trying to maintain our for-profit system. The Guardian published an article on doctors' call to abolish insurance companies in the US, and I think it's time to try it. Enough is enough. The only reason anyone would be against it is because he or she is making money with things just the way they are.

Realistically, perhaps it's time to offer a "public option." A nonprofit plan that will be able to compete with for-profit plans, give them a standard to live up to.

Unless the large corporations are scared of real competition. 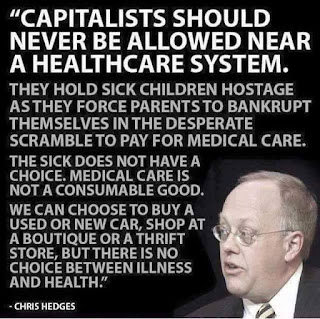