December of 1914 was the first winter of the Great War. It was also the year when all up and down the western front, acting independently of each other or commanders, battalions of British, French, German, and even Indian troops declared an informal truce on Christmas. 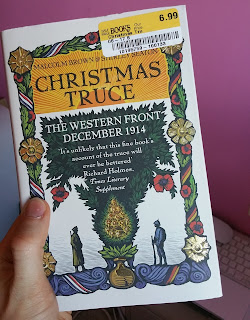 Technology in warfare had advanced to the point where neither side could advance without taking heavy losses, so 1914 saw the front lines becoming entrenched. Unable to move, soldiers had to stay put for months at a time, often with the enemy's lines less than 200 feet away.

Being so close to the enemy for such long stretches of time meant the soldiers of both sides became familiar with one another in a distant sense. Soldiers could hear one another conversing, shouting, screaming. They could see the other side was dealing with trench mud, cold, terrible rations, just the same as they themselves were. Being stuck with one another, dealing with the same conditions, and unable to escape one another produced a mutual sense of empathy.

After months of brutal but otherwise fruitless fighting, soldiers on the German side began doing something bizarre on Christmas Eve up and down the Western Front that crossed Belgium and France: they began putting up Christmas trees and lighting them, and then they began singing carols. Although not all British and French troops were so tolerant of such behavior (a few regiments did shoot the trees), a great many simply enjoyed the harmless spectacle. On Christmas Eve, the Germans sang a carol, and then the British answered with a song of their own, performances earning applause from both sides. It became a sport of sorts, exchanging carols instead of bullets.

The mood became so lighthearted that troops began popping their heads above the trenches, and they were not fired upon. All along the front line, the two sides sent people to meet halfway in No Man's Land and talk of a temporary ceasefire to bury the dead that lay around the battlefield. Thus up and down the line men emerged from their frozen trenches, walked into the void, and began burying the dead. With that grim business done, the two sides met. They talked. They bartered food, souvenirs, unique pieces of each other's uniform. Those who could speak across the language barrier exchanged news and helped translate for others.

But it wasn't over. Christmas Day 1914 remained quiet. Though the sequence of events varied along the front, both sides continued the ceasefire on the 25th in the spirit of the season. Soldiers on both sides enjoyed the respite from the violence, caroling continued, and once again soldiers met on the battlefield, shared meals, smoked together, conversed when they could, exchanged trinkets and photos.

Some parts of the front did not enjoy a truce (the French were far less willing to fraternize with the enemy, though both sides still honored the season by refraining from hostility on Christmas), but it happened in more places than not. They sang songs together, they took photos, they complained about the war. It was a very different attitude at the time: war was thought of as a sport between nations, not a battle of ideals, so there was no harm in ceasing gunfire for a few days. The truce allowed soldiers to meet the enemy, and many discovered the propaganda they had been fed was simply not true. Many of the Germans on the front had lived in Britain before they had been recalled to Germany for war, and they had no real hatred for the British. One British soldier recorded his astonishment hearing a German soldier speaking English in a London accent.

The authors present the story of Christmas through quotes and excerpts from letters, diaries, newspapers, and official communique from the time period, which means it does not flow as a story, but fragments of disconnected information. Despite this, the descriptions of a contest of caroling replacing the exchange of gunfire warmed my heart and made me giggle with glee. I could imagine myself on either side of the front line, tired and scared and exhausted after months of slogging through mud and keeping my head below the ground for fear of a bullet hitting me between the eyes, suddenly given a chance to walk freely, to laugh and sing again--and why not with the enemy? War is pointless, we can't move, we're all in the same muck together, so why the hell not meet the enemy and laugh about our situation?

Most surprising, especially to the British at the time, who had been bombarded with anti-German propaganda portraying them as savage "Huns" with no honor out to conquer helpless peoples, was that the Germans were almost always the first ones to decorate their trenches for Christmas and propose a ceasefire. This must truly have been a magical moment to realize the enemy was, in fact, human. (Though racial identity also played a huge factor at the time. The British considered the friendly Germans Saxons, nearly cousins to themselves, while the enemy "Huns" were the Prussians.)

Some parts of the front enjoyed a semi-truce beyond the new year. Many soldiers on both sides did not want to resume fighting. The authors relate an amusing story on one part of the Western Front shortly before the year ended that told of the German soldiers warning their British opponents that the General was visiting the front line, and they had to look like they were still at war, so they advised the British to keep their heads down until he had gone. Even the savage enemy says "crap, the boss is here! Everyone look busy!"

Sadly, the truce could not last. Middle command often approved the ceasefires and welcomed the break from the fighting, and at first so did high command. Inevitably the brass decided hostility must resume, and informal ceasefires could not happen again.

While the truce wasn't universal along the front, and it didn't last as long in some areas compared to others, that it happened at all is no miracle. The war had only just begun, and soldiers assumed it would last a few months and then everything would go back to normal. That had been the pattern of war in Europe for centuries prior, and nobody had reason to suspect 1914 would be any different. As the war dragged on and became more brutal (poison gas, air attacks, submarine attacks), ceasefires would not happen again on such a grand scale. War seemed less like a sport, and being in such close proximity to the enemy did not engender empathy for his situation. It only stirred resentment for all the enemy had inflicted on one's fellow soldiers.

Still, for many soldiers who survived the war, that Christmas would be the most memorable of their lives. A moment when Christmas sentiments actually meant something.
Labels: book Christmas Special review