I played STALKER: Shadow of Chernobyl. I actually bought it years ago, but I couldn't get into it then. I didn't understand how to play; everything was so unintuitive, and the game does not have a tutorial section. So I left it alone for years and forgot about it. I now know why I couldn’t get into it years ago.

You don’t feel like a hero. You are an ant scurrying about trying to survive in a nuclear wasteland after Chernobyl blows a second time. I was ready to feel like an ant this time. It turned out to be a pretty good game. A few bad design choices (timed side quests, respawning enemies, not fully free to explore and nothing much to find by exploring, minimal interaction with people so the different factions are barely noticeable, multiple endings and no way to change your ending without replaying the entire game), but otherwise it is engaging and terrifying.

Combat doesn't work the way it does in Fallout 3. It feels more realistic, more authentic. It's still fantasy, but you can't just run into the open guns blazing like you can in the Bethesda Fallout games. You must take cover and aim for the head, and until you find/buy guns that can shoot in a straight line, you are nearly helpless. The combat is the best-designed part of the game. It alone makes STALKER appealing because it is a legitimate challenge.

Sucks I got a bad ending (I want to be rich!), and all I did was succeed at every mission, helped people whenever I could, and didn’t piss anyone off. I’m a Stalker, so I thought I was supposed to collect artifacts and sell them. Wasn’t I?

I helped a lot of people, and yet I got a bad reputation. This could have been my playstyle, too. By default I expected to just break away and wander off by myself. Other players’ first instinct might be to join a faction, or take side missions from other people and hook up with them. I didn’t even realize there were different factions in the Zone with whom to hook up; you interact with them so little. Didn’t seem fair, but then again Fallout 3‘s ending was also bullshit: you get the bad ending if you don’t sacrifice yourself, even though your companion is immune to radiation and can thus accomplish your mission and nobody has to die? Up yours!

(And why is the Zone totally devoid of women?)

So I played it again and got the true ending. Knowing what I needed to do helped a lot, and it was a pretty good game. Not perfect. Numerous issues concerning balance (there's no XP, money is so-o-o-o easy to get, good weapons and equipment are easy to find, which means you don't need to take any side quests), story delivery (the end is simply explained), open world (no other stories to uncover, no interesting people to talk to), and I would rather have spent the majority of the game fighting the mutants than humans and exploring more scary places than navigating an open world that has nothing in it, but it was compelling, creepy, challenging, and intriguing all the way to the end.

I enjoyed the game so much I read the book that inspired it... 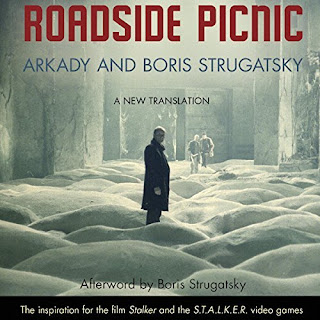 Aliens landed but didn’t make contact. Instead they left behind landing zones. The laws of physics appear warped here, and various objects lay strewn about these Zones. Hazards also exist. Hazards that defy explanation. Science is after these objects, as they have properties not understood but could potentially have value for humanity. For some people, finding these treasures is worth the risk, as everybody is willing to pay.

The book has a strange structure. It doesn’t tell of all the grand adventures of our protagonist, Redrick Schuhart, in the Zone as he braves dangers he can’t comprehend to retrieve objects he doesn’t understand. Neither does it take place from the lofty narrative point of view of scientists trying to understand what all of this is and what it means.

There are some tantalizing details of how the Zone affected various people, how the objects that came out of it have affected humankind, and I would have liked the story to be about that. There’s so much the authors could have done with this idea, but all of it is left vague and merely talked about—all the interesting stuff happens elsewhere in the world, to other people. A scientist does analyze the potential meaning of the Visit and the Zones and the objects and anomalies found there, but the book is not about that either. Finally, the book does show some of Redrick’s dangerous journeys into the Zone, and the bizarre way the Zone affected his daughter and father, but the book is not about that. All of the interesting stuff, it seems, becomes merely details mentioned in passing.

The concept is so underdone is borders on betrayal. Such a wonderful setup so full of potential, and this is all that happens? Lots of talking about things that happened elsewhere? Only passing mention of the objects and hazards, and we barely see any of them or what they do or how they affect Earth? We only get three glimpses of Redrick at three different points in his life, and that’s it for character development. So much more could have been done with all of this!

But in a way I respect this limited point of view because it demonstrates that nobody really understands what’s going on, or what it means, and what we do experience is just tantalizing enough to be thought-provoking.

The only tangible effect the Zone has had on mankind is to create another opportunity for people to do the one thing they always find a way to do: use others to make money. Redrick sees himself as a loner, a Stalker, free to do as he pleases, but of late he realizes that all he’s done his whole life is wander the Zone for other people because they had money he needed. Redrick’s wish that the world should just be a better place not because he’s young and idealistic, but because he’s lived his life being used by others who don’t give a shit about what happens to him or anyone else—used by a man who would send his own son to die just to get an object from the Zone—strikes me as an endearing way to show how the Visit affected mankind. It didn’t. Not in a meaningful way.


I then watched the movie Stalker.

The Zone is supposed to be a hazardous place full of danger and strange things, but our three protagonists encounter nothing. In 3 hours, they come across nothing, nothing happens, no dangers, no hazards, no strange events, no surreal scenery or monsters or environments. They spend 3 hours wandering an abandoned town and factory, talking about nothing, terrified of the supposed dangers all around them, and that’s supposed to convince us the Zone is a strange and bizarre place? They could have encountered something—anything!—to convince us that they’re in a hazardous place, but they find nothing! They don’t even reach the room that grants wishes. What was the point? If you’re going to base your movie on a good book like Roadside Picnic, you should at least show what the book showed!

I knew it was going to be an arthouse film, so I was expecting it to be this surreal, eccentric masterpiece. Instead... There is no surreal cinematography or artsy camerawork. It really is just 3 hours watching 3 men wander an abandoned factory talking about all the danger surrounding them.

I’ve read that the director made the movie slow and boring on purpose just to stick it to the Soviet censors, and if that’s true I respect it, but don’t do it to the film adaptation of Roadside Picnic! It's an awesome book, and it deserves a good adaptation! Save your rebellion for your own project!

The video game is the better adaptation, and it doesn’t even use the same justification for the Zone as the book! The book has nothing to do with Chernobyl or radiation. In the game, aliens are not part of the story at all. The game should have kept the same setting; the setup in the book is perfectly good, so why change it? One wonders what might have been had the game not had so much cut from it, and if they’d had people who knew how to make an open world game on the team. (Having a woman on the team would have helped, too.)

Really, the gameplay makes up for the shortcomings in story and setting and balance and everything else. The creep factor also gives the player a real sense of dread. I like each for what it is, but skip the movie.
Labels: games movie review Roadside Picnic seek the original Stalker