Zootopia: a Critical Look Back

It's been 3 years since the release of Zootopia. Has it been long enough to look back on it with a more critical eye?

I enjoyed the movie then, and I still like the movie now, but I submit that it is not the important message on racial issues people have made it out to be.

[TL;DR: Zootopia has nothing to say about racism, and it's quite confused about the issue. It tries to make a stand about prejudice without showing anyone being victims of prejudice. We are told herbivores are overworked and underappreciated, but they're fine. Citywide, they are not victims of anything. Nick, a fox, is denied service at the ice cream parlor. Nick was muzzled as a child, a g-rated hate crime. Predators are victims of oppression, but the movie tries to convince us prey is the oppressed group. What we see onscreen just doesn't add up.

Furthermore the movie uses animal species as an analogue for human race relations, but the metaphor is also confused. Foxes have sharp claws and teeth. Rabbits do not. Foxes once must have hunted rabbits as prey, therefore they will have an instinct to do so. This is not stereotyping, as the movie tries to claim. It is history. It must have been because it's obvious: rabbits are prey, foxes are predators. They have different anatomies. They have different instincts. These are intrinsic differences between the animal species. These differences do not exist between members of the human species, which makes it a bad way to demonstrate how racism even works. You can't use animals to show how prejudice is bad when rabbits have every reason to be wary of foxes, when deer have every reason to fear wolves because there are obvious, measurable, physical differences between the species. These cannot equate to anything in the human race, so please don't try.

The movie can't decide what it wants to be. It's an entertaining film, but it got its themes and messages mixed up during the rewrites. I think the original shock-collar draft would have had more to say about oppression, but we may never know.]

At the very beginning of the movie, we are introduced to the history of this world via a grade school play: predator hunted prey, prey feared predator, predators were consumed by an uncontrollable desire to kill. But then at some point, predator decided to stop hunting prey, prey decided to stop fearing predator, and everyone just got along. The very first scene of the movie establishes this as history.

Judy is a rabbit living on a farm and has dreams of moving to the big city to be a police officer. (Never mind that we've seen this small town kid moves to the city as an analogy to losing innocence a hundred times in as many other movies.) Apparently, Judy is the first rabbit police officer. Why have there been no rabbit police officers before Judy? Is the stereotype of rabbits being just carrot farmers true?

Then Judy gets to Zootopia, and she discovers the world does not work the way she expected. Zootopia is a pretty racist place, as evidenced by the scene in the ice cream parlor. Elephants refuse to serve Nick simply because he's a fox.

Hell, Clawhauser stereotypes Judy because she's a rabbit. The movie draws some attention to this, encouraging us to lose our preconceptions of what a cheetah should be, or what a rabbit could be.

So multiple predators have gone missing over the last couple months, and nobody seems interested in finding them. Judy takes a case of finding a missing otter, but she is given no resources, and her job is on the line.

Why would she be given no support? Why would she only be given two days to solve a case the entire force hasn't cracked in two months? Why does Chief Bogo resent her so much? It's implied having a rabbit police officer on the force is a burden, and she's part of some "affirmative action" program, but really, why? Why is Judy the first rabbit police officer, and why is her presence perceived as a burden? The movie never really answers this. Bogo is her foil simply because the plot says she needs some authority figure to fight.

Back to the case she's investigating: why did the cops not interview anyone at that nudist retreat? Surely there were records that her missing otter frequented the place, and the police would have had some kind of inkling to talk to people there.

No leads? No witnesses? Give me a break. The ZPD is just lousy at investigations. 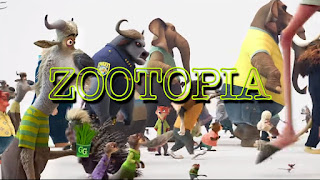 So Judy extorts a street-smart criminal fox, Nick, with information about his unpaid taxes to force him to help her with her case. How would she know he hasn't paid his taxes? She has zero support from the force and has no access to any records of this kind, so how would she be able to hold this over Nick? A voice recording alone would not be enough to convict him on tax evasion.

Regardless, they get to the end of the trail and find all the missing predators held in prison cells on the order of Mayor Lionheart. Seems random predators have been going feral for no apparent reason, and the mayor has been keeping them here. Judy shares a video she took of the place and the mayor is arrested and charged with a crime.

What crime? Nobody knows why these predators went crazy, or why, so what did the mayor do wrong? Clearly he was holding them there to figure out what was going on and to keep them from harming others, so it seems to me he was doing the right thing, but he is arrested and charged with some sort of crime nonetheless.

And then the press conference. The moment the movie falls apart.

In an effort to explain what she found and what's happening, Judy tells the press something the audience heard back in the very first scene: that predators have an innate urge to kill, and that urge seems to be coming back. She certainly shouldn't have said that, as she doesn't know this for sure, but Nick is upset with her not for speaking out of ignorance but for generalizing about predators.

I've heard it said that this little play we saw in the first scene is supposed to represent the subtle racism Judy grew up with as a kid and still believes without realizing it. However, the audience understands that this information is history, a legitimate explanation for why the world is populated by animals, why the city of Zootopia exists, and why predator and prey coexist. It is not presented as racist ideology that unfairly stereotypes predator species, but important worldbuilding that establishes how the world works. As far as the audience is concerned, it's true, so why is Nick mad with her? Didn't predators used to hunt prey generations ago? Don't predators have an inborn desire to kill? They must, so why is Nick upset with her for saying so? For all they know, Judy could be right. Why does Nick not acknowledge that possibility?

Nick's reason for being upset with Judy escaped me when I saw the movie, and it came across as a forced breakup at the end of the second act that so many movies have (James Cameron's Avatar had the same development at the same point in its story). I didn't understand what the big deal was.

So then we have a brief montage of riots and fear of predators spreading throughout Zootopia. Gazelle says words to the effect that this is not the Zootopia she knows; the city is supposed to be inclusive and tolerant. She's obviously been living in her phallic tower for the last twenty years and has never been to the ice cream parlor that refused to serve Nick, or met the boy scouts who muzzled Nick as a kid just because he was a predator species.

I didn't buy the idea that this was a unified city before Judy came along and "broke it." It's a very racist place to begin with. The only people who didn't know Zootopia was racist and divided were the elites who don't actually have to live in it.

Feeling guilty for causing the unrest in the city, Judy quits the force and goes back home. There she learns about a flower (a Nighthowler) that can turn people feral. Why is this plant allowed to exist? Clearly lots of people know what it can do, so why is it still around, and how did nobody detect the chemicals in those feral predators' blood or something? For that matter, why has nobody put this stuff in a pipe and smoked it to get a rush? Seems something like this would have become an illegal substance by now.

After extracting information from a criminal via torture (a storytelling sin in and of itself. Yes, kids, torture works!), Judy and Nick learn that some villain is using a concentrated form of this flower to turn predators feral, spreading fear among Zootopia, and keeping the prey species in power.

That works from an action perspective, but a couple questions. We haven't seen any evidence that prey species are oppressed or downtrodden, so why does this plot exist in the first place? If anything, the predator species are being oppressed—Nick was denied service and muzzled, not Judy. Prey is the majority, so how are prey species the underprivileged here? Why would the assistant mayor need to hatch this plan to put prey in power and spread fear of predators when every person of every prey species in the movie is clearly not living under oppression? This isn't some new thing she's trying to create either; she outright states that prey is overworked and underappreciated. That's not what we've seen throughout the movie.

In the end, the villain goes to jail, Nick becomes Zootopia's first fox police officer, and he becomes Judy's partner on the force.

Why have there been no fox police officers before Nick? Does this imply the stereotype of foxes as untrustworthy is true, too?

The movie wanted to be about racism, but I think people are projecting more of that message onto it than it actually conveys. It's an entertaining film, but there were far stronger and more consistent ways to make a statement about race, even in a kid's film.

I have to wonder how the movie would have turned out had the original story been produced. I think that—a movie taking place from the point of view of an oppressed group of predators—would have been more potent. As is, the movie has so many plot holes and confuses worldbuilding with statements on race relations that it doesn't really say anything.


(and it bothers me this city is populated entirely by mammals. Where are all the reptiles and birds? Do they have their own segregated city, and will we see that in a future movie?)

(and I am so tired of the DMV being the butt of every bureaucracy joke. Come on I've been going to the DMV nearly every year for all my adult life, and I have never had slow or incompetent service!)
Labels: review Zootopia