This story was originally published in Solarcide in 2013. The website is defunct, so I'm posting it here for all to enjoy.

Patience is a virtue. Keep telling yourself that.

Chester sat on his couch watching a blank screen. Satellite television had been out for the last four days, and he had called the satellite company three times to schedule a service appointment.

The tech on the other end said all techs were very busy so he couldn’t make an appointment, but he promised to keep Chester in mind and would call him back as soon as he could.

So Chester sat and watched the blank screen, imagining all the wonderful shows he was missing. It was good to relax in silence for a change. Wife was at work, kids were in school, his day at the office was complete. All that was left was the sound of the furnace.

As if on cue, there was a loud crackle from the basement, the furnace shut off, and the faint smell of burnt electronics drifted up through the vents. Chester sighed, rose from the couch and walked through the house to the kitchen. He gently opened the basement door and carefully climbed the rickety, old stairs to the concrete floor.

He knelt at the furnace, pulled off the cover and inspected it. Chester wasn’t sure what he was looking at, but the burning smell was coming from the motor. He pulled out his cell phone, searched for furnace techs and dialed the closest one. A male voice answered on the first ring.

“Hello,” Chester said, “My furnace just died and I’d like to have someone come out to look at it.”

“I’m very sorry, sir,” said the operator, “But all of our techs are busy. We can’t make an appointment for you just yet, but if you leave your name and number we’ll be sure to get back to you as soon as we can.”

“Sure, my name is Chester Gregs.” He left his address and phone number with the operator, ended the call and slipped the phone back in his pocket.

He turned and began walking back up the stairs. The temperature was sure to drop below freezing, and he did not look forward to telling his wife and kids they’d have to bundle up tonight. He then thought about how to keep the pipes from freezing.

He placed his foot on the seventh step from the top. The stairs cracked, split, and collapsed. Chester dropped to the floor with them and blacked out for a few minutes. When he woke up, he lay flat on his back on the concrete floor beneath a pile of splintered wood. His right leg was broken and bleeding in two places. Chester could move, but chunks of wood and nails were gouged into his flesh. Everything hurt.

Slowly, he reached down his pants, pulled out his phone and dialed. 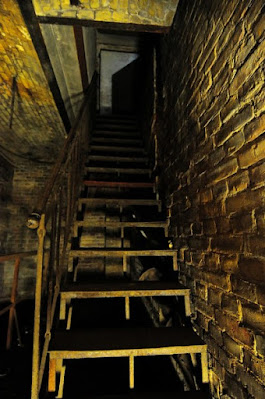 “Yes, sir, try to stay calm. All of our medical staff is very busy and I can’t dispatch an ambulance right now, but your phone number and address are on file and one will be sent to you as soon as possible.”

Chester waited patiently for several hours. He heard the front door slam and shouted as loud as he could.

Footsteps clomped across the floor overhead, then the sliver of light coming from the doorway widened. Chester could just barely see his wife’s face from this angle.

“Emily! The stairs fell out, the furnace is dead and I have a broken leg. Help me out of here!”

“Oh, Chet, I’m so sorry! Listen, my boss just sent me home with a bunch of reports I gotta finish! As soon as I’m done I’ll pull you out!”

She disappeared back into the house. The sliver of light narrowed a bit, but didn’t snuff out completely.

Her muffled footsteps climbing upstairs to the bedrooms traveled all the way down here. A few minutes later, water flowed through the pipes and trickled down the drains. She was in the shower. Chester figured he could wait that long at least. It wasn’t too much to ask.

The water turned off. An hour passed. He waited patiently. He considered calling her again, but that would be selfish. Her job could be on the line if she didn’t finish those reports. He supposed he could lie still and wait.

The footsteps hesitated, then the sliver of light brightened a little. ”Dad?”

“Oh my God, dad! Let me finish my homework and I’ll be right there!”

He slipped back in the house, closing the door all the way, climbed the steps and entered his room. He slammed his bedroom door. Faintly he heard Emily yelling at him to stop slamming doors.

The door closed and Ralf ran up the stairs. The vibration stopped when he reached his room. Chester lay still and waited patiently. He knew he wasn’t the most important person in the universe; other people had things going on too and it was vital he not expect immediate attention.

He woke up shivering. He pulled out his cell phone, dialed Emily’s number and waited for an answer. On the eleventh ring, her groggy voice answered.

“Honey, I’m still in the basement. Do you have time to get me out and take me to the hospital?”

“Chet, it’s three in the morning! I have another long day ahead of me tomorrow!”

“I know you’re busy, hon. We all are. But when you can, do you think maybe you can help me?”

“As soon as I can, Chet. I’ve got a lot going on right now. I haven’t forgotten about you. I promise. I’ll see you soon.”

She ended the call. Chester lay beneath the splintered wood. It looked like the bleeding had stopped, but his leg hurt, even to think about moving it.

Chester thought about calling his neighbor, but a quick glance at the phone reminded him of the time. It would be rude to wake him up just for this. So he lay on the concrete and shivered to keep himself from freezing. Now he was glad for the sweater he was wearing. He finally fell asleep.

When he woke, he dialed Emily again.

“Emily, I see it’s morning. Do you think you have time now?”

She sighed. Many seconds passed before she spoke. ”Chet... Honey... I’m at work. I’m very busy. I promise I haven’t forgotten about you. I have to go now.”

The call ended. Now Chester called his neighbor. He answered on the second ring.

“Hi, Peter. I’m trapped in my basement. Can you come over and help me out? Maybe drive me to the hospital?”

“Uuuuuuuh, I would, but I got a lot going on right now, Chet.”

“That’s all right, I understand. Thanks though.”

Chester next called his brother. He lived a few miles away and Chester felt a little bad asking so much of him, but he was beginning to think he was out of options.

“Are you at work? Can you come by later?”

He didn’t bother to call either of his sons. He lay in the cold basement for a few more hours, waiting patiently for someone to get back to him. He was getting antsy, and his leg was starting to itch. The skin all over his body felt like it was slithering and peeling.

Suddenly he had an idea. He searched for a contractor and dialed the closest one.

“Second Chance Remodeling, how may I help you?”

“Hi, my stairs collapsed on me and I’d like someone to come out here and rebuild them for me, please.”

“I’m very sorry, sir, but we’re very busy. Can’t make an appointment now, but if you leave your name and number we’ll get back to you as soon as possible.”

“I understand. Sorry to bother you.” He left his name, number and address.

“It was no bother at all, sir. Goodbye.”

He was hungry and incredibly thirsty. He briefly thought he could find some bugs to eat, but it was winter and everything was dead. He heard water running, so the pipes must not have frozen last night. He was relieved for the good insulation in the house, and was now glad he had the basement insulated as well. It wasn’t as good as the rest of the house, but it was enough to keep the pipes intact for now.

The sub pump kicked on. Chester rolled his head and looked down the hole. There was water down here, and it wasn’t frozen. He reached out for it, but the hole was too deep for his hand. Chester painfully heaved large wood fragments off himself, picked some nails and splinters out of his body, sat up and slid closer to the hole. His broken leg stuck out, swollen, immobile and useless.

He reached down, scooped out some water and slurped it. It tasted horrible, but it would do for now. When his thirst was satisfied, Chester lay on the cold concrete and waited.

Quickly he realized he would freeze to death if he lay on the concrete any longer. He crab-walked back to the pile of wood, dragging his broken leg. He climbed up the pile and lay on top of it. More splinters and broken nails skewered him, but it was better than the concrete.

Chester waited patiently for Emily, Louie and Ralf to come home. They did, each slamming the door in their own unique way. Each walked up the stairs to their rooms. Chester contemplated yelling for their attention again, but he thought twice. He had already made his request known.

He considered calling the ambulance again, but he trusted they would get to him when they could. He wanted to call the contractors again, but he had already been enough of a bother. So he reclined on the splinters and nails and rested.

He awoke to loud dripping sounds. Instantly Chester sat up and looked around. One of the pipes had burst and city water was now pouring into the basement. There was already an inch of water in here.

Chester pulled out his phone. It was five in the morning. He considered calling Emily and warning her of the emergency, but she had sounded pretty mad when he called her at work. He didn’t want to be a bother, so he slipped his phone back in his pocket and let the sound of the running water soothe him back to sleep.

A couple hours later he awoke to the sound of footsteps over his head. Chester was waist deep in cold water. He couldn’t feel anything below his hips.

Footsteps in the kitchen. Now Chester figured it was an appropriate time.

“Chet, I know you need help!” shouted Emily through the closed door. “And I know the pipes broke and we have no water! Please stop calling me stupid by thinking you have to tell me these things! I know! I’ll get to them as soon as I’m able!”

The footsteps pounded across the kitchen, down the hall and out the door. Chester sat still and waited. The water climbed higher and higher. He held his arms up for hours to keep his phone dry. He wanted to be ready for when the contractors called him back. Now he needed a plumber. He thought about calling one while he waited, but everyone was so busy it just didn’t seem right to bother anyone. Patience was always rewarded, he thought to himself. Always.

Chester waited as the water climbed further and further up his chest. His heart slowed. It became hard to breathe. Finally he couldn’t keep his arms up anymore. He dropped them. His phone shorted out and went dark.