78.9% of everything Hollywood does is adapted from a book, or short story, or comic. Never settle for an adaptation. Seek the original!

Here's a tough one, but too good not to attempt. I didn't know the 1988 film "Who Framed Roger Rabbit?" was based on a book until very recently, when I watched it again as an adult. I had to wonder how it was possible to write this story as a book. It's such a visual thing, cartoon characters in the real world, that it didn't seem possible to make it interesting as a book.

I should have known it wouldn't even be the same story. 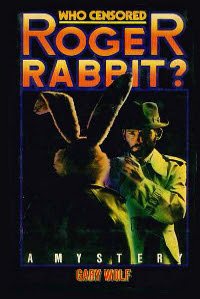 In this world, cartoon characters are a race of people, and they get jobs performing for comic strips and comic books. The "artists" responsible for such strips are actually photographers who frame their actors, complete with the word balloons.

Roger Rabbit plays second fiddle to Baby Herman. When he was hired by his syndicate boss, Rocco DeGreasy, Roger was promised a starring role in his own comic strip. But he's still playing the fall guy to Baby Herman's antics. He hires private eye, Eddie Valiant, to find out why.

Things go awry when Roger is shot dead, and so is Rocco on the same night. Acquiring an unexpected partner, Eddie continues investigating the case.

He interviews the various players, Roger's wife, Jessica, a voluptuous toon resembling a human, Rocco's brother, and a multitude of others caught up in overlapping scams and subplots, all intersecting Roger.

It's a detective story. A genuine, hardboiled mystery. Eddie Valiant is the stereotypical (read: archetypical) private eye. He drinks too much, is short on cash, isn't on good terms with the real men of the law, etc. Although to his credit at least he doesn't have a gambling problem.

The mystery is absurd, but the world it creates is fun. Humans and cartoon characters living side by side. They're not animated cartoon characters though. It's all about comic books and the syndicated comic strip industry. Toons speak with word balloons appearing over their heads. Some learn to speak with voices, and still others learn how to speak in voice only and suppress their word balloons. Dealing with these balloons provides great narrative gags.

Eddie does little but travel around town talking to people. That's the majority of the book. Interviews. Talking. But it's not boring. The mystery he tries to piece together is complicated, and he comes up with multiple scenarios for whodunit, and all make perfect sense, which keeps the reader guessing right up to the end. The book is a very easy read, and it succeeded in making me forget I was reading a book. I haven't felt that in a very long time.

It's both a spoof of the detective story and a serious installment thereof. The world it creates is ridiculous, but it somehow manages to pull you in with the complicated and well-constructed mystery. To say anything more about the story would give away too much.

Here's another movie that's so far from its source material it shouldn't even be called an adaptation. The book is all about syndicated comic strip characters. Blondie and Dagwood, Hagar the Horrible, Dick Tracy, etc., etc. They are all mentioned in the book.

The movie takes the idea a step further and makes the whole thing about animated cartoon characters. Not Hagar, but Bugs Bunny; not Dick Tracy, but Donald Duck. These are the actors who live as real people among us. It's such a good idea it makes me wonder why Wolf himself didn't write it that way. Maybe he figured comic strips were more fitting to the atmosphere of a detective story? Cartoons bring to mind happy, bouncy, musical, colorful characters. Comic strips conjure up gritty, sketchy, monochrome imagery... Maybe I'm reaching.

Anyway, while the book is a bona fide detective story, the movie is an action/comedy. Someone must have read the book, and it inspired them to take the basic idea of cartoon characters living among us as actors and run with the idea. They ran in a totally different direction, but a good one! Really the story isn't that important, or complicated. It's just the excuse to put all these cartoon characters in the same place at the same time.

The story is nothing like the book. The book is entirely made up of interviews. Eddie talking to the many players, trying to figure out who's lying and who's telling the truth; who has something to hide and who doesn't. All about Eddie trying to unravel the mystery of who shot Roger Rabbit and Rocco DeGreasy. Although it is little more than interview after interview, the book's mystery is so complicated I had to know who did it!

The movie is an action/comedy about an evil madman who wants to destroy Toontown (the part of LA where most of the Toons live) as part of a business venture, framing Roger for the murder of the man who owns the property. The movie's mystery is very thin. More like a few bullet points inserted between all the action sequences in the screenplay after the fact, but it's just enough to hold the movie together. And it's interesting to boot. Still absurd, still funny, and still a surprise all the way up to the end. You can safely watch the movie first and then read the book later with no spoilers, because the two stories have absolutely nothing to do with one another.

Even though the mystery isn't nearly as complicated, just seeing all these cartoon characters from competing studios interacting is enough to carry the film. It creates its own logic, and it works very well. In many ways I wish the book had been more like the movie.

I like each for what it is. The absurd mystery of the book, and the visual spectacle of the film. Reading what inspired Hollywood to create such a movie in the first place was an eye-opening experience. Check it out!
Labels: seek the original who framed roger rabbit