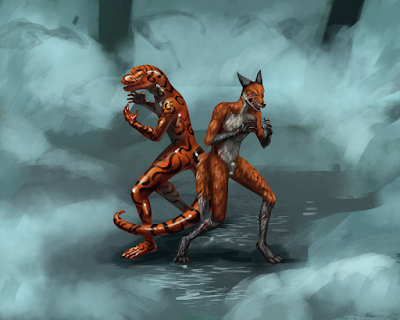 Illustration by ValentinaPaz of the planet Xce, from Dangerous Thoughts.

A scene from one of my favorite chapters. Kylac and a local salamander named Doma are defending themselves from something in the fog. Where is Deka?

Kylac and Doma stood back to back. The birds were visible only as shadows through the fog, circling them, some running left, others running right, stomping loudly.

Kylac had opened four portals. Four more to go and the grove would be complete again. So far they had not killed anyone, but the birds were hungry, and they were getting braver.

“I admire you,” Doma said. “You’re not afraid of them. Your first instinct isn’t to hide and hope they go for someone else. You stand and fight.”

“But you’re not a prey species. This is easy for you.”

The birds were keeping formation. Nobody dared to break it again, and yet they were not fleeing.

“Doma... Having predator instinct is not a wonderful thing. Just look at them. They’ve gone mindless with hunger, and what is their first thought? To take someone else’s life.”

“They’re not like this!” Doma said. “I’ve lived with these people all my life. A few days without food...”

“It’s horrible how fragile civilization is.”

“Everything in me wants to drop to the ground and hide!” Doma shouted over the footsteps. “Wait for them to be satisfied and leave me alone. I envy you, Kylac. I wish I had your instincts.”

Kylac was silent. The rhythmic sound of footsteps around them made concentrating on portal calculations difficult.

“Do you know anything about the canines of Rel?” he asked.

Doma’s tail hit the ground. “I’ve met two Relians before. Pair of females. I had just matured, and she didn’t even have to entice me. She was just so eager and fun to be around. I felt weird with her raptor watching us. Someone told me you’re the most promiscuous species in the contacted universe.”

“Did that someone tell you what my kind was before we met the raptors?”

“No. I was more interested in watching the raptor hunt with the birds.”

“Relian canines were the most bloodthirsty, violent people you ever met.”

“Yes. Before we discovered portal physics, before we met the raptors, we were fiercely territorial. We killed everything that came in scenting distance. We even killed raptors.”

The salamander was silent. Kylac continued, shouting to be heard over the stampede that ringed them through the fog.

“For thousands of years, that’s all we did. Our instinct was to keep every scent away from us because everything could be a threat to our survival. We call it scent anxiety. The raptors teach us to channel that impulse into sexual aggression. If not for them, we would still be seeking out and destroying every scent that comes close. Think what would happen if we ever left our planet with that kind of instinct. I’ve heard people say that without the raptor, the fox would become a cancer consuming the entire universe. So when you talk about predator instinct, don’t be so sure it’s a good thing. Predatory nature can consume you.”

The birds still circled. Doma was even more intimidated by it than Kylac, and yet he stood firm.

“So what about them?” Doma said. “Are they animals?”

“No. Just hungry. You’re more prepared to deal with it than they were. Deka and I are here so this doesn’t happen to the entire civilization. I am not supposed to be fighting. Deka is here so I don’t have to fight. If I keep doing this—”

Suddenly one of the birds charged them. Kylac met her head on and scratched her across the neck. The bird reeled and stumbled away.

Another bird charged Doma. The salamander leaped on him, hung from his neck, and brought him down. As he fell, the bird raised his foot and scraped his claws down Doma’s back. The salamander fell from the bird’s neck and screamed. The bird hit the ground and tumbled, bowling into another, mud splashing around them.

The birds’ formation broke, and they dispersed into the fog. Kylac rose from attack stance and walked to the moaning salamander, who was sprawled out on his stomach, bleeding. Kylac clamped his hand around Doma’s snout.

The salamander screamed with his eyes instead. Kylac let go of him and scented him from head to tail. Doma was bleeding from three large gashes that ran from the shoulder down to just above the base of the tail.

Doma knew it as well as Kylac: the bacteria in the water would clean the wounds. It was how the salamanders survived horrible injuries in more primitive times. Still, he didn’t move.

Kylac bent at the knees and hoisted Doma’s body upright. The salamander clung to Kylac as the fox walked him to the nearest tree. Doma was cursing. The words did not translate.

“Be glad that bird didn’t get your slit,” said the fox. “You want pain? Try that. Deka screamed for days one time that happened to him.” Kylac’s waterlogged tail flopped around. “He never teased me about exposed genitals again.”

Doma was trying to laugh, but walking was too painful. Finally they reached a tree, and Kylac lowered Doma’s hindquarters under the surface. The salamander lowered himself the rest of the way. The bacteria began eating the infection inside the claw marks, but he would be in a great deal of pain for a long time.

Kylac sat next to him, dangling his paws in the tree water. “So how’s the instinct now?”

Doma didn’t meet his eyes. “I want to sink here and hide forever.”

“What was I thinking, going against teeth and claws? I have nothing! All I can do is make them angry. What am I doing?”

“Calm down, calm down. You’re wounded, so your first thought is to go back to what was safe. What would a predator do in this situation?”

Doma thought about it for a while. The tree pond filled with his blood. “Keep hunting.”

“I can barely move!”

“If you don’t move, you will die. Now you have to function even while wounded.”

Kylac stood and walked across the grove. He crouched, closed his eyes, and opened another portal. The rainwater flowed into it, and Kylac suddenly became conscious of the rain soaking his fur again. He looked over his shoulder at the salamander’s head poking up from the water.

“When this is over, would you like to try another fox?”

Doma glared at him. The tip of his tail rose out of the water and splashed back down. “How can you think about that now?”

“My raptor raised me well.”

Doma panted through his nose a few times, looked around at the fog, and then back to Kylac again. “It would be my first time... With any male. I’ve been curious.”

Kylac licked his lips. “I’ll make sure it’s your best!”