A followup to Why The Left Will Always Lose, we really need to talk about what happened to Lindsay Ellis.

She's a prominent YouTuber, one hell of a progressive essayist, and yet she was chased off Twitter for daring to call a movie derivative. People on social media somehow twisted that into claiming she was hating on Asian culture or erasing Asian voices or something. She has been an ally for years, and yet people turned on her.

The Alt-Right did not "cancel" her. People on the Left did.

I consider myself politically left of center. Liberal, broadly speaking. Progressive would be a better term. I'm in a lot of leftist circles, and I hear people on the Left congratulating themselves all the time about how cancel culture is nothing special, just people getting the inevitable reactions for saying something stupid/racist/bigoted in a public space. Yeah, that does happen, but what happened to Lindsay Ellis is not that.

There are people on social media who are just looking for things to be outraged by. I've seen it myself. They are not interested in nuance, or discussion. They just want something to be angry about. Outrage is currency on social media, which can be converted into followers, and nothing is more outrageous than seeing someone you trusted fall from grace. We share the hell out of that shit.

There's no thought on social media. No nuance. No comprehension. It's just see meme share meme.

Our outrage is misplaced. That's the point she makes, and that's the point I've been making for years. The alt right is marching in the streets chanting Jews will not replace us, and what are liberals doing? We're arguing over pronouns and attacking our allies for not being woke enough. It sickens me.

The Left used to be violent radicals hellbent on overthrowing the capitalist hierarchy. Now we debate pronouns. We attack each other for accidentally misgendering someone. We oust people from the group based on little more than the perception of iniquity. If even Lindsay Ellis can be canceled, then there is something very, very wrong with liberalism.

We just had an attempted coup on the US government in January. White Supremacist talking - points are becoming mainstream. We should be uniting against the rise of the alt right. Instead... We alienate our own allies, often on accusation alone. We dig into their past searching for some little sin to inflate that proves they're a secret racist or alt-righter or something. The Alt-Right knows liberals love to purify their ranks of people who aren't woke enough, and they take advantage of that: https://www.theatlantic.com/magazine/archive/2020/03/the-2020-disinformation-war/605530/

That's how we lost Al Franken from the Senate, at a time when we needed allies more than ever. Do read the article: https://www.newyorker.com/magazine/2019/07/29/the-case-of-al-franken. It shows how Liberals were manipulated into ousting one of their own. The allegations turned out to be baseless, but nobody has apologized to him. Not even the late night comedy shows that turned on him in his hour of need. He was a progressive ally who had proven himself time and time again over the years, and yet on accusation alone his fellow progressives shunned him.

We almost lost George Takei to the same thing. People turned on him based on accusation alone, but it turns out there was more to the story than memes could tell. Even in the era of MeToo, accusation does not equal guilt, but Liberals leap at the chance to dogpile on someone if there's even a hint that they might not be woke enough, or inclusive enough, or maybe said something questionable 10 years ago. Conservatives do not attack each other for not being conservative enough, but Liberals will screw over their own allies for the sake of purity among the ranks. No room to change one's mind or grow as a person or even make a mistake and then learn from it. No possibility there's more to the story than a single screencap can convey. https://observer.com/2018/05/george-takei-accuser-scott-brunton-changed-his-story-of-drugs-assault/

I think more people on the Left need to pay attention to what happened to Lindsay Ellis. We need to stop patting ourselves on the back for calling people out and alienating our own allies. There's a difference between "it's just consequences" and "canceling." If even someone like Lindsay Ellis, who has proven herself time and time again to be a valuable ally of inclusiveness and progressive ideas, can be canceled, then the alt right will win, and a future GOP president will be even worse than Trump because the Left will have squandered all of their allies. The Alt-Right is uniting while Liberals and Progressives and Leftists bicker amongst one another.

Fuck cancel culture. Fuck call-out culture. Fuck social media and the mindless reactions it fosters. Before you like or retweet, investigate any claims you hear. Research any memes you come across. Do not thoughtlessly share stuff and gang up on someone because they've been accused of something. Wait for more information to come out. Check sources. Look for substance instead of following emotion.

And for the love of God, the Left needs to unite. It needs to stop arguing over pronouns and matters of inclusion and find something to fight for. I posted some ideas a while ago about how the Left can get radical because progressives need to get radical if we hope to change anything. The Right is getting more and more racist and fascist as time goes by, but in the USA, the Left seems unwilling to confront the big problems, choosing to believe everything is fine so long as we don't slip to the Right. That's not good enough. We need something to unite behind besides political correctness. We are way beyond "incremental change." 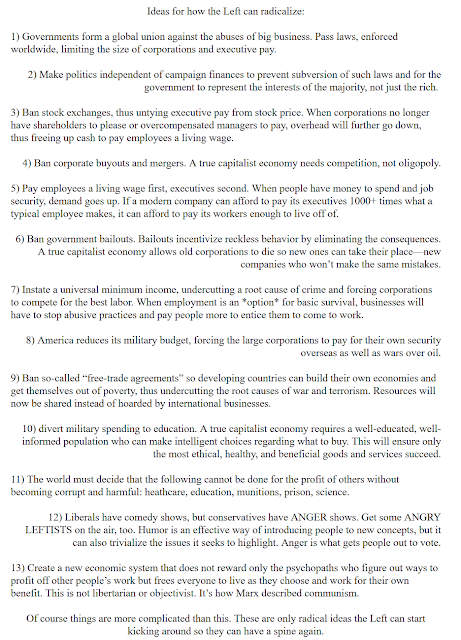 We have been trained to believe all the problems with the country are caused by other poor people ruining it for the rest of us. We never think about who is really in charge of this country. We need to confront the abuses of capitalism. We need to admit that at the root of all our gun violence and workplace grievances and financial insecurity and student debt and endless wars and healthcare worries is capitalism. Unite against this!

Stop attacking your allies over matters of inclusiveness and realize the poor are powerless and not your enemy. The single mother who needs foodstamps is not your enemy, but the shareholder whose only job is to collect stock dividends is. The CEO who gets a $5M bonus while you get your hours cut and your healthcare benefits scaled back is your enemy. This is what's really going on in America. The rich are guzzling down trillion-dollar taxpayer bailouts and stock buybacks while you get a $1,400 COVID relief check.

Stop bickering over pronouns and whatever you think might offend this group or that group and fucking unite for real change!