Remember the first DOOM game? Yeah, back in the days when processors were measured in megahertz, usually in the x86 family, and hard drive space was often measured in kilobytes. Way back in 1993, when computer graphics were just starting to take off. True 3D graphics were around, but the average home computer couldn't render them.

DOOM was the most realistic game to hit the market at the time. Wolfenstein 3D was technically the original First Person Shooter, but it was DOOM that made the leap into realism. Wolfenstein was made of boxes. No diagonal walls, no height differences, and everything was evenly lit. DOOM changed everything with circular rooms, staircases and flickering light effects! THIS was real!

Old games are usually forgotten as advances in graphics are made. It's not very often someone dares to remake a game. Well, Id Software did. They remade the original DOOM and called it DOOM 3, taking what little story DOOM had and building a realistic, believable narrative out of it.

But there was a problem with it. The whole concept is pretty ridiculous. Hell invades mars. Only in a video game, right? Now try to wrap that idea in a "realistic story," and reveal it to us in realistic, in-game ways. We learn what's happening by picking up PDAs and listening to crew audio logs. We get clues to what's going on from watching video files and talking to friendly characters.

It tries very hard to adapt it from "game story" to "cinematic story." Problem is: we already knew what was happening. We already knew hell was invading this research base on mars. It's no mystery, but the game forces us to listen to long, droning log entries and plot exposition explaining the same thing over and over. Meanwhile the players are thinking "we know what's happening! Stop trying to build a mystery around it!" The game wastes so much time trying to tell a story we already know, and it gets so annoying I wished I could just skip the log entries and get back to killing things.

But that's not all! Id turned DOOM 3 into a clone of Halflife. Think about it. What was the plot of Halflife? Scientific laboratory creates portal to another dimension, disaster strikes the facility, releasing the interdimentional creatures around the whole base, and now the player must cross the base to reach the portal opening site, jump inside the alternate dimension and stop the invasion single handedly. DOOM 3 follows the exact same sequence! It's the same damn game!

The original DOOM stands alone as a genre-defining milestone in computer gaming. It's not right that the remake is actually a ripoff of another game that followed in DOOM's footsteps. It may be coincidence (DOOM 3 was in production for five years), but it's still a shame.

For gameplay, DOOM 3 is little more than walking down dark corridors while monsters pop out at you. This worked in the original games, but our expectations are higher these days, and it comes across as been there done that. There's no room to fight most of the demons because the spaces are so narrow and cramped. You never get a good look at any of the demons either. Surprisingly there are few creatures actually in the mars facility; most of them teleport in once you enter a room. I don't like this; if it's an invasion, shouldn't there be a lot of creatures wandering the base?

One level gives the player a choice whether or not to send a distress message to alert Earth and send a fleet to evacuate the base. This decision has no impact on the game. Whether you alert the fleet or not doesn't matter; either you summon the fleet, or Swann (the devil himself) alerts it for you, and hell's monsters can still get off the planet no matter which decision you make. Why bother?

And after walking down bland, metallic corridors for the entire game, Hell itself lasts merely a single level. How disappointing. Even Halflife made us go through several levels in the other dimension. The final boss, the Cyberdemon, is quite easy to beat. Hell's champion, and that's all it takes to kill him? What a letdown.

In spite of everything I just said, it's not a bad game. it is scary in places, it is challenging, and some nice new things were added, like the cherubs. They're the creepiest addition to the DOOM universe. Nothing is more disturbing than babies with insect wings leaping at you and clawing your eyes out. Buuuut then Id added the biggest cliche` of all to the enemies list: mutant spiders. Couldn't they think of something else?

I love how the user can interact with computer terminals without going into a different screen. I believe it's the first time a game did this, and it's an excellent way to make the place seem more real. Unlike in the original games, DOOM 3 succeeds in making the player feel like he's in a real place. The architecture, the design, the floor plans. It's how a real outpost on mars would be designed. But technical leaps are about all DOOM 3 has going for it.

It was a bad idea to try to retell the DOOM story in such a serious way, because there is no mystery. The story just wastes our time trying to hype up a revelation we saw coming before we even got to the checkout. 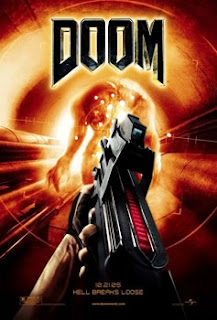 The game DOOM 3 turned the DOOM story into a Halflife clone, so it's a double ass-rape that the long-awaited movie should further reduce it to a Resident Evil clone!

It's simple: Hell invades a mars base. That's it! Why is the movie about a genetic experiment that changes evil people into hideous monsters?

Once you talk about a genetic infection passed through a bite or a wound that mutates dead people into monsters, the movie is officially Resident Evil, not DOOM!

I'm not sure how this basic fact could be lost in the translation from game to film, but I suspect budget had a lot to do with it. The movie obviously didn't have much of a budget, so the story had to be simplified. I imagine this is what the producers thought: Not enough money to show an army of hellspawn invading mars? Change it to zombies instead, this way we only have to show three or four monsters, and we can cloak them in the dark so no one can see how bad they really look! Plus, everybody loves a zombie movie!

It wouldn't have been hard to adapt the original DOOM game literally: lone survivor of hell's invasion has to fight through a mars base against all hell has to throw at him to find his way home. THAT would've been cool, but thanks to low budget they couldn't even stay true to DOOM 3! It's now a zombie movie!

So, we wander down dark corridors, terrified at monsters popping out at these one-dimensional characters for over an hour. Then we find out what's causing this infection. Turns out only BAD people mutate into monsters. Good people change into superhumans!

I'm sure the writers didn't consult any scientists regarding this twist, but come on. Even someone with only a high school diploma knows this is total bullshit. We're offended that DOOM has been raped by Resident Evil, so we're not willing to make this leap of logic!

Guess this means the religious character was a bad person after all; he got infected and mutated into a monster. But he had enough awareness to kill himself before he became a threat. He kills himself by banging his head against the window until he splatters his brains out. It was supposed to be horrifying, but I swear the entire theater laughed.

Finally, we conclude with a POV sequence. It is really cool, but it makes no sense. We just spent the last hour and a half walking down dark corridors, terrified of these creatures that don't seem to die, and now all of a sudden they're dead in one shot! The chromosome mutation cannot affect the guns this guy is using!! He could've done that any time! It's obvious the filmmakers pitched the movie on just this POV sequence. Story was the excuse.

I like that the Sarge turns out to be the villain. I didn't see that coming, but the final fight? A wrestling match? That was the best they could do? Shit, I wanted to see Sarge turn into a Cyberdemon! Or a Mancubus, or something! But we didn't even get that! A WWF finale is all we got!

It's a good, cheesy action flick, but that's it. The POV sequence makes me wish the entire movie had been like that, because it was the most entertaining thing in it. But…I'd rather just play the game.

Skip the movie. In fact, skip DOOM 3. Play the original DOOM and DOOM 2 to experience what game terror was back in '93.
Labels: doom doom 3 doom movie halflife resident evil review seek the original skip the movie