I watched Jetsons the Movie recently. I remember it was one of my favorite movies as a kid. How is it now that I’m an adult? Well, it’s no Brave Little Toaster. Watching it now, all I can think is... they’re making a movie of the Jetsons for theaters, and this was the best they could come up with?

The story is weak. Barely anything done with it. It’s heavy-handed. Especially the whole “father paying more attention to his job than his family” motif. It’s been, what, three days? George has just been promoted to vice president! Yes, you selfish brats, your father does have to provide for you. Give him some time to get settled into his job before hating on him for not spending time with you.

And the environmental message? It’s so corny I think I’ll give up cereal for a month. "This galaxy is about different kinds of life forms…" "…All working together for the good of everyone." What does that even mean, and how is that trite nonsense supposed to convince a giant corporation to mine elsewhere?! 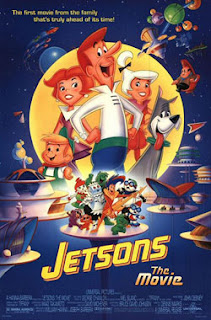 Then there’s Judy’s subplot. She’s all broken up about losing her boyfriend, Cosmo, but he isn’t her boyfriend. She likes his music, but obviously they’ve never met until that concert because he has to ask her name. Then he randomly asks her on a date! Doesn't even know her name and he just pulls her from the audience and asks her out! So why is she devastated about losing him? “I’ll never trust another boy ever again!” she says. How did he break her trust? She never knew him! They hadn't even been on a date yet!

Elroy and Teddy 2’s friendship is abrupt and rushed, too.

Looking at the movie now, it shows a couple flashes of friendships forming, shows a hint of a girl recovering from a breakup…but doesn’t actually tell these stories. Instead it relies on dropping the bullet points from the synopsis of each subplot's development around the movie and letting them stand in for those stories. They just remind the audience of actual storytelling that should be happening. It's lazy, but hey, when writing a kid’s movie, why bother telling a good story? Kids just want flashy images after all. It’s all I noticed as a kid.

Really, the most enjoyable part of the movie is the You and Me music video. I love the songs Tiffany performs for this movie, and it’s obvious the producers turned it into a jumping platform for her singing career. Too bad it didn’t take off. Tiffany has a great voice. You and Me looks like it belongs in a different movie. It looks like a full-length music video that was edited down to fit in the movie. Too bad it isn't, because it's the best part.

Coming in close second: some great early computer animation. Back in 1990, that looked amazing! It was a novelty and it made me smile.

Painful third: the pseudo, early-90’s rap. Everyone was doing this for some reason--every TV show, every cartoon. Guess they thought it was cool and all the kids loved it. I hated it when I was a kid and I still hate it. It’s awkward, especially George and Rudy 2’s sprocket rap. Hoo boy that’s awful. About the only enjoyable moment of early 90’s rap I can remember is Turtle Power from the Ninja Turtles movie.

Outside of nostalgia, it’s not a very good movie to watch. It’s harmless, but too shallow, too light, too hamfisted. Come on, it’s the Jetsons. Couldn’t they think of a better story?

Solution to the conflict in five seconds: Night security! Makes sense. Spacely has the budget for an employee whose sole job is to push the start button, but not for some security to protect the plant from sabotage?
Labels: 1990 Jetsons the movie review