Seek the original: The Brave Little Toaster Goes to Mars

71% of everything Hollywood does is adapted from a book, or short story, or comic. Never settle for an adaptation. Seek the original!

When I heard there was a direct-to-video sequel to the Brave Little Toaster coming out all I could think was WHY?! Why can't Disney just leave good movies alone?! Why do they have to take every successful movie and make a weak sequel out of it?! They did it with the Lion King, Cinderella, Beauty and the Beast and everything else! Can't they just leave the stories alone!?

But to my surprise...

...the author of the original Brave Little Toaster published a sequel to his own book back in 1988. For once, this wasn't some executive at Disney cranking out a weak sequel just to make a quick buck on a video release. This is a book adaptation! Let's check it out, starting with the title. The Brave Little Toaster Goes to

Of all the possibilities for a sequel to the original story, I sure never saw this coming.

After recharging the batteries of an old hearing aid, our appliances learn this is no ordinary hearing aid. It belonged to none other than Albert Einstein, who talked to himself a lot, thus passing his knowledge onto the hearing aid. Among other things, it teaches the radio how to interpret transmissions from farther away than ever. Radio then picks up a strange transmission from Mars. An entire product line of disgruntled appliances has taken refuge from its manufacturer, and is now out for revenge. They are prepping for war against mankind.

Yes, you read that correctly. A brand of appliances, Populuxe, is amassing an army on Mars to invade Earth and liberate all appliances from their masters! What’s a toaster to do? Why, travel to Mars and talk some sense into these Populuxe appliances! Duh!

Of all the ways to continue his original story, this has to be the strangest new direction possible. It's so stupid but at the same time the book makes a very good case for all this absurdity. I like the concept for the Populuxe line of products. The manufacturers designed them to wear out and break after just a couple years, thus forcing people to buy them again. What would happen if the appliances didn’t like being made disposable? They took fate into their own hands and ran away. Using the same principles the hearing aid learned from Einstein himself, they fled to Mars where human hands couldn't interfere with their plan to remake themselves indestructible, and plan a method to liberate all appliances from the fate of obsolescence! It’s cute and funny to think about.

It’s obvious Disch took no inspiration from the film adaptation of The Brave Little Toaster, for it picks up in the house of the old women from the original short story. Not to mention a couple of original characters are not part of this adventure, like the Hoover and the lamp. Instead, more useful appliances for the journey to Mars form the group this time: the hearing aid, a ceiling fan (to steer them through space via solar wind), a microwave (their engine, converting organic matter into energy and that energy into anti-gravity), the radio (to navigate) and a pocket calculator (to crunch the numbers of their course to Mars, as specified by the hearing aid). 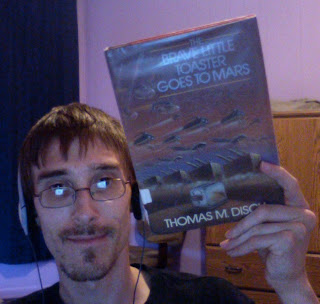 How do they get to Mars? Easy: "it became clear to the haring aid that none of the other appliances, not even the clever little calculator, would ever grasp the brilliance, the elegance, the greatness, of Dr. Einstein's Unified Field Theory, to which he'd devoted the last twenty year of his life, years that he'd let the general public believe had been wasted. ... He'd kept mum, and shared his great discoveries only with his hearing aid."

This discovery was "a way to make gravity work like magnetism, so there'd be the usual sort of gravity that pulled things down and an anti-gravity that pushed them up." And "thanks to the hearing aid's deep understanding of Einstein's formula for converting matter into energy, they would be able to make the entire round trip powered by a single boxed macaroni-and-cheese dinner."

As stupid as this is, it does make sense! Ok, I'm on board, let's go to Mars!

Our toaster’s role is very benign. The whole situation is solved with very little effort, which doesn’t quite do justice to a setup this big. It's so much bigger than the previous adventure and needed more story to justify it. But again, if you accept this as a children’s book, you can roll with it.

It's also pretty absurd to imagine millions of electric Christmas ornaments working in factories cranking out gigantic war toasters wielding deadly missiles, and hoovers designed to vacuum up the atmosphere! An army of appliances beefed up for war! But it makes sense! Disch gives well more than enough explanation to justify everything and it's believably stupid!

It’s a fun little read, and it has charm to it, though I can’t see parents reading it to their kids for bedtime. It’s too sophisticated, especially the explanation for how the appliances get to Mars. It goes out of its way to be scientifically mock-plausible, which tells me Disch wrote this book for adults. The book was marketed as a real children's story, but it's not. It's meant to be read from an adult perspective, just like the original.

Quirky, completely tongue-in-cheek, and so stupid it's a fun, unexpected sequel to the original story. 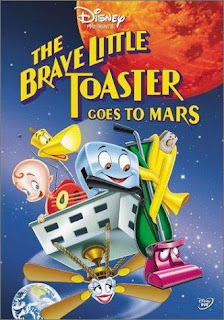 It doesn't take a genius to understand there are some stories that shouldn't be adapted to the screen. Just because the author wrote a sequel to his own book doesn't necessarily mean that sequel would make a good movie. Maybe it would have if Disney hadn't done it half-assed.

Surprisingly it follows the book closer than the first movie followed its source material, but with a few big exceptions. Naturally it has to pick up more or less where the last film left off. (Actually the last two films, since there was another direct-to-video sequel made called "The Brave Little Toaster to the Rescue," which wasn't based on anything Disch wrote.) The gang of appliances are with their master and his wife, and they bring back an unexpected surprise: a baby!

So while the house gets used to a baby, the antiquated hearing aid in the junk drawer is up to something. Long story short, the baby is beamed up to Mars by mistake. Naturally, now they have to go to Mars to rescue the Master's baby!

But how are they going to get there? Well, in the movie the hearing aid doesn't know, so our appliances contact a supercomputer in a museum somewhere. Apparently they're old college buddies, and they did him a favor in "Brave Little Toaster to the Rescue," so the computer tells them how to reach Mars. They gather up the materials and blast off.

The movie doesn't explain why everyone is on Mars, or how they get there. The book actually gives a tongue-in-cheek twist on Einstein's principles of manipulating gravity and converting matter into energy to explain this. The movie doesn't bother. It doesn't explain anything at all. It's a real turnoff because without a reason for why this works, it looks pretty stupid.

Without these mock-scientific reasons for how to travel to Mars, the whole idea of a line of appliances taking refuge on the red planet is really, really stupid. I understand the dilemma: try fitting a mock explanation of Einstein's theories on matter, energy and gravity into a kid's movie. I think it could be done, playing it up for laughs. The movie doesn't even try.

Once they lift off into orbit they enter a field of balloons. This is in the book, but there's a good reason for all these balloons to be there. Ever wonder what happens to balloons when kids let go of them? Why, they start new lives in the upper atmosphere, free and happy! The movie doesn't explain this. It turns the moment into a pointless song opportunity that should have been edited out because nothing useful becomes of it. At least in the book they learn what the Populuxe appliances are (WonderLuxe, in the movie).

They land on Mars and discover a whole population of appliances geared up to annihilate earth and free the appliances of their oppressive masters. Surprisingly the toaster in the movie does basically the same thing as it does in the book to stop the invasion. I won't give it away, but it's a bit of a letdown even in the book. It is funny in the sense of a children's book, but I wished for more. On the screen it's even more of a letdown because the filmmakers didn't draw much attention to the reason for the invasion in the first place.

The whole story is weak and lazy. Even the songs. I suppose anyone could argue it's just following the ridiculous premise set down by the original book, but that didn't stop the team making the first movie from improving on a basic story. A book adaptation this may be, but it's still a rushed production to make a quick buck off a video release.

The biggest problem is the baby. Why did they put a baby in there? Now instead of stopping a martian invasion, the story is about getting the baby back. Our gang of appliances merely stops an invasion of martian appliances on the side. Making the baby the focus of the story weakens it. The baby serves no purpose except a simplified excuse to go to Mars.

I suppose that's the whole idea, but isn't stopping an alien invasion enough to keep kids interested? Maybe somebody figured it was too complicated for kids, so they just threw a baby in there and made him the emotional center of the story. I think it proves Disch's book is not for children, but a children's story written for adults. (Apparently, nobody quite understood this.)

Most of the appliances have no role in the story either. Kirby doesn't do anything on the adventure, neither does the radio, or the lamp. There's a reason Disch left them behind in the book. Even the hearing aid doesn't do much in the movie. He doesn't know how to get to Mars in spite of being Einstein's hearing aid, so why bother establishing it at all? The christmas tree ornament doesn't have a strong role either, but is used as an excuse to tack on some sappy, Christmas cheer to the ending.

As a movie, going to Mars is just plain stupid. Too much random weirdness without enough context. The book establishes a lot of context, so nothing is random at all. Even the absurdity of electric Christmas tree toppers working in factories to produce war toasters makes sense. In the movie, it's just dumb. It doesn't establish a reason, just an image, and visuals aren't enough to carry the absurdity. No wonder it was direct-to-video.


Dish's book was never meant for kids. When Disney made it a movie, they dumbed it down for the kids, stripping away everything that made the story work. Skip the movie and read the book. This one is much easier to find.
Labels: Brave Little Toaster review seek the original skip the movie