I wrote this a long time ago but didn't post it because I was afraid of coming across as too negative. As an author, I don't think it's wise to be too critical, since I live in a glass house after all. Now... I'm tired of not doing things. Refraining from action is not progress. Action is progress! So here's action!

97.03% of everything Hollywood does is adapted from a book, or short story, or comic. Never settle for an adaptation. Seek the original!

A retarded (sorry, mentally challenged) man tells his life story. Life has taken him on a wild ride, and though he can't speak clearly and his mind doesn't work quite like you and me's, he done lived a good life.

You see, he's a huge kid. Over six feet, 200 pounds, and only a teenager. Well, one day he's walking down the street and somebody sees him and recruits him to play football for his high school. This starts him on the course of his entire life. 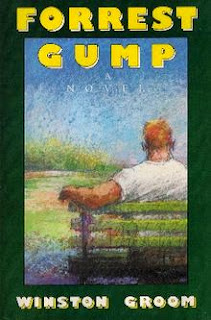 He doesn't understand plays and strategies, nor can he even catch the ball, but he can run. He can run very well, and nobody can get in his way. It's enough to make him a valuable player.

He gets to go to college playing football for them. He discovers he can do the complex physics equations that the professors took years to learn. He is labeled an idiot savant: super intelligent in a small number of areas, and yet, with an IQ of 75, barely able to spell his own name.

He learns to play the harmonica as soon as he picks one up, surpassing his friend, Bubba, who has been practicing for so long. When the game goes bust, he has to drop out of college and the Army snatches him up and ships him to Vietnam.

Using his football running skills, he pulls several wounded soldiers from harm's way. He is wounded in combat, sent to a hospital, picks up ping pong and excels at it instantly. He is discharged, meets president Johnson for a medal of honor, and then he is recruited to play table tennis professionally, representing the USA in a tournament in China. He saves Mao Zedong's life, gets lost in the city, and plays in the tournament. He doesn't even know who wins or loses by the time he goes home. He wanders up north where he meets up with Jenny, a hippie girl, whom he has known since grade school. His harmonica playing gets him noticed, and he ends up in a band with her.

Jenny persuades him to throw his medal away as an act of protest against the war. He accidentally injures an important man, and is sent to an asylum. Up until now, his adventures have been believable. It's here, after the medal-throwing incident, that things take a turn for the downright ridiculous.

His talent for complex math lands him a spot at NASA in lieu of a prison sentence. Forrest is sent into space along with an abrasive female astronaut and a nasty orangutan. They crash somewhere in New Guinea, where they are taken in by a tribe of cannibals, one of whom went to Yale and became a chess player. They have to plant cotton for the cannibals for four long years.

From here on out, the book lost me. Every review on the cover says this is a hilarious satire, but I can't figure out what it's satirizing.

Over and over, Forrest is "discovered," and someone else takes him for a ride, and at everything Forrest does, he succeeds. Everyone else around him--the educated, the sane, the qualified normal people--fail in whatever they do, and here's this idiot with no plan, no direction, succeeding at everything and not even trying. That's supposed to be funny, and I think it would have worked if not for the 4-year detour with the cannibals. That one just went too far, and the rest of the book builds on those events, so I can't pretend it never happened.

After some more misadventures, he ends up making a name for himself arm wrestling at a bar. Someone hears of his talent and recruits him for pro-wrestling, and he becomes a star!

He leaves wrestling, and is discovered to be a great chess player! He happens to meet a former grandmaster and whips his ass at a game. The guy then sponsors Forrest's entry into a real chess tournament! 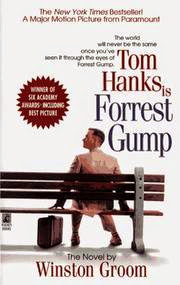 I'm supposed to find this funny, absurd and endearing, but instead I found it irritating. Forrest isn't even on board with any of this stuff. Other people approach him, recognize his talent and say he's perfect for this, or a natural at that. They offer to bring him into ping pong, or pro-wrestling, or tournament chess, or running for senate. None of it is Forrest's idea. He's just there, doesn't know what he's doing or why, but he sure is good at everything that comes his way.

When Forrest finally makes a decision for himself, instead of letting someone else tell him he should do this or that, his life falls into place. But even that's not enough because he gets bored of it, walks away, lives on the streets like a bum, figures out how to play keyboard and becomes a one-man-band!

What is the point? What is this satirizing? What's so funny? I was on board until chapter 12. Really, I was, but after that point it becomes too ridiculous for its own good, and not even in a funny way. If there is a joke, I missed it.

I do like how the idiot of the story seems to be the normal person, and all the normal people are made the fools for it, but I don't think the book draws enough attention to that. Perhaps Macbeth was right. Life is a tale told by an idiot, full of sound and fury, symbolizing nothing. That seems to be Gump's life all right. I don't think it's all that funny, and if it had something to say, I missed it.

Taking every adventure of Forrest Gump that works and leaving out the ones that don't, adding in a few new ones.

As a kid, Forrest is in leg braces. He meets Elvis Presley, where he dances along with Elvis' guitar playing. Then Elvis starts dancing just like Forrest did.

He's good at running, and coach recognizes this and recruits him. He plays football through high school and college, gets a degree for it and meets president Kennedy, shakes his hand and shares a joke.

Then he's shipped off to Vietnam, picks up table tennis, meets president Johnson, shows him his war wound and is recruited for the team to play against the Chinese. Forrest is discharged, buys a boat and starts a shrimping business in honor of Bubba, his shrimp-obsessed Army friend who was killed in the war.

It's actually much better than the book. Forrest's misadventures are more down to earth. There's no being shot into space, no living with cannibals, no wrestling, no Hollywood gig, no chess championship, no reunion with the orangutan that flew into space with him and keeping him as a pet for years. In the book, Forrest has so many adventures, and they follow such a predictable pattern and become so ridiculous that he becomes a cartoon character. Omitting these adventures improves the story greatly because now, in the movie, Forrest becomes a real person who could conceivably have gone through life this way.

The movie also explains why Forrest's shrimp business takes off: a hurricane destroys everyone else's business but Forrest's. Bad news for the local economy, good news for him, who is able to rush in and dominate the industry. (Symbolic of America after WWII? ...nah)

Jenny returns, leaves him, and Forrest decides to go jogging. He has no reason to stop, so he just keeps running because why not? He runs around the country for three years. This sounds like something Forrest would have done, and for just that simple reason. It's a hell of a lot more believable than him getting recruited for a chess tournament and a Hollywood movie at the same time. Forrest is a real person in the movie, and the audience can identify with him and his trip through American history. I don't know what he's supposed to be in the book.

In the movie, Dan is Forrest's lieutenant, and he's wounded in battle. Forrest pulls him out of the jungle and saves his life, but he loses both of his legs. In the book, Forrest doesn't meet him until he gets to the hospital. They become friends, but they didn't serve together.

Dan becomes a down-and-out bum in both versions of the story, but I actually like the book's take on why he becomes depressed. The Dan in the book thought he had life figured out. He had an academic philosophy for how life works, and he thought he was living by it until Vietnam happened to him. Now his life's philosophy is in shambles and he doesn't know what to do or where to go.

The movie uses this idea, but now Dan is convinced he's destined to die a hero in the war, and Forrest ruined his plan. It's a weaker reason, but his and Forrest's relationship is much stronger in the movie than it is in the book, more than making up for the slightly less sophisticated reason for Dan to be so depressed. Digitally removing his legs in every scene he's in is incredibly well done. Creepy, too.

Incorporating Forrest Gump into these archival reels is a nice touch. It's very convincing, though you can tell something just ain't quite right. The lips synch up with the voice, but something is still off... They go by so fast you don't have time to question them, so they're amusing for the couple seconds they're on screen and then we move on.

Subtle special effects, detailed sets and costumes and lots of archival footage recreate every era of American history in recent memory. Forrest feels like a real person who somehow made his way through all of it. He may be an idiot, but things turned out all right.

Now that his adventures are more grounded in reality; now that Forrest isn't ridiculously good at absolutely everything; now that he doesn't get shot into space and become a chess champion, his life story is amazing to watch. Its message is a little unclear, but it's more than the book, which had nothing at all.
Labels: forrest gump review seek the original