92% of everything Hollywood does is adapted from a book, or short story, or comic. Never settle for an adaptation. Seek the original!

I finally gave in to the hype and watched...

Frozen (2013)
Disney
Two sisters, Anna and Elsa, are inseparable as children. But Elsa has some sort of magic power to make snow and ice. One night she injures Anna by striking her in the head with her magic power, and only troll magic can heal her. For some reason the trolls recommend erasing all memory of magic from Anna's mind, and hiding Elsa's magic from Anna. Anna and Elsa live in the same palace, but must grow up separately. Anna grows into a free spirit, but Elsa is repressed and reserved.

When Elsa comes of age and becomes queen, her powers are revealed, and people are afraid. She is ashamed, so she flees to the mountains, not knowing that even her absence is not enough to keep the townspeople safe from her. She unknowingly plunges the town into winter. Now Anna must trek up the mountain to talk to Elsa and convince her to come back and restore summer. On the way, Anna learns the meaning of true love.

The whole friendship and separation of Anna and Elsa at the beginning is so rushed it barely registers as important. Did they love each other? Were they close? As 6-year-olds maybe, but we really don't get to know who they were before they were separated.

Why did Anna have to have her memory erased of all things magic? Why was it necessary to hide Elsa's power from Anna's knowledge? This isn't explained, and the decision really messes up both girls' lives. The entire conflict of the movie would have been solved had Elsa simply told Anna what happened to them when they were children! The conflict comes from characters not talking to one another, and this forced dilemma is so annoying I wanted to yell at the screen.

Elsa wants to protect Anna from her dangerous power, but she won't tell her why! All she had to do was explain it to her, and the whole conflict would have been fixed! Anna finds out about the magic on the day Elsa is crowned queen, and nothing bad happens to Anna because of it, so what was the point of keeping it a secret from her all these years? Absolutely contrived conflict.

But wait, that's not even what the movie is about! The whole thing is about Anna's journey to discover the meaning of love. Every time the movie begins to focus on Elsa and her growing power, the movie rips that away and shoves a scene about love in our face!

The plot forces the movie to be about love. Over and over it's shoved in our face that this is what the movie is about, but it's not where our attention is. No scene drives this home more than the scene with the trolls. Instead of listening to why Anna and Kristoff are there, they go into a song about love. It derails the story more than any other scene, forcing it to be about Anna finding out what love means, and it's so contrived all I wanted it to do was get back to Elsa and show us what's happening to her!

Why didn't the trolls help Elsa learn about her power? They knew about the power, so they must have some idea how Elsa can control it. Teaching her about it would have been a much better solution. Instead, they make her afraid of it, and her father cements this fear by isolating Elsa, treating her like a freak. The whole conflict is their fault, and nobody seems to care.

Olaf has a cool subplot. A snowman who wants to experience summer. It doesn't go anywhere! Finding out snow melts in the summer could have been a heartbreakingly funny revelation, but it's unused! He seems to know about it the whole time! Kristoff talking for his reindeer, Sven, is a fun idea. That could have been a great character trait, but he only does it twice in the whole movie! The subplot of prince charming turning out to be the bad guy is great, but it's introduced in the film's last ten minutes, so it has no relevance. All of these ideas are good, but none of them are developed enough, so they never come together to form a complete whole.

The song Let It Go is so wonderful. Now that I know the movie it comes from, I actually like it less. It's supposed to be Elsa's moment, but her subplot may as well not be there because the movie keeps taking our attention away from Elsa and forces love down our throat.

I keep using the word "forced." That's how the movie made me feel. The whole plot is forced to be about one thing when it wants to be about something else.

At the end, love is what saves Elsa from her own power. Love saves the town from her power. Love saves Anna from Elsa's power. Love has the power to thaw a frozen heart. Thanks, Olaf, for explaining it, because it was so obvious we never would have realized it on our own. Love also stopped Voldemort--where was Olaf to explain that when we needed him??

Wait, love was all they needed to thaw a frozen heart, but it wouldn't have worked on Anna's frozen brain when she was a child? How does that work? Ah, that's what happens when magic is part a story. If it made logical sense, it would be science.

Love, love, love, enough about LOVE already! Love is so vague, so contrived, so clichéd, so broad it has zero meaning. Elsa has this power, and no one thinks to ask why, or what its purpose is? Why not be about that instead of delivering a sappy, trite, meaningless message about LOVE? All that just to confirm yes, Elsa really does love her sister?? All that to reveal Anna really does love Elsa??!! All they had to do was talk to each other and they would have learned the exact same thing!


So what about the original?

The Snow Queen
by Hans Christian Andersen
Once upon a time (which the story does not begin with), a demon created a mirror that reflected and exaggerated only what was negative. People looked in the mirror and saw their noses larger, their blemishes worse than they actually were, etc. One day the mirror was broken into a million pieces so tiny they drift in the air and embed themselves in people's eyes or heart, causing them to perceive only the negative things in the world and ignore everything positive.

Two childhood friends, a boy named Kay (or Kai, depending on the translation you read) and a girl named Gerda, are happy playing their childhood games. Then one day, a piece of the mirror gets stuck in Kay's eye, and another piece embeds itself in his heart. Now he sees nothing but the bad in the world, and he feels angry and cynical all the time. He becomes a troublemaking little boy, and he isn't the same anymore.

One day in winter he ties his sled to the sleigh of someone he shouldn't. It happens to belong to the Snow Queen, who whisks him away from the village and to her ice palace, where she cools his heart and makes him forget about his previous life. 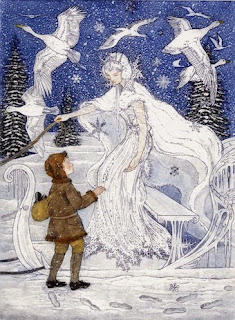 Little Gerda embarks on a journey to find out what happened to him. Thinking he may have drowned in the river, she offers her favorite red shoes to the river in exchange for giving him back. But the river refuses the offering, because it did not take Kay from her. Gerda ends up on a boat that takes her far downriver, and she ends up in the house of an old conjurer (witch?) who enchants her to forget her mission and live with her for a while.

When Gerda sees a rose, it reminds her of the games she and Kay played years ago, and she comes to herself. She talks at length to the various flowers, but learns nothing of where Kay could be. She talks to the crows, and the crow thinks he knows where Kay is. With the crow's help, she breaks into a palace and intrudes on a princess, thinking Kay is imprisoned there, but it is not him. Instead of being locked in the dungeon and tortured, the prince and princess set her free in a coach and she rides away.

She learns the Snow Queen has Kay in her ice palace, and after a brief and strangely suggestive encounter with a robber woman, Gerda rides a reindeer far north to Finland, where she shelters in the house of a another old women. The reindeer takes Gerda to the palace entrance, and it's up to Gerda to brave the snowflake guards. Fortunately, the power of prayer and her pure heart allow her to make it through and find Kay. 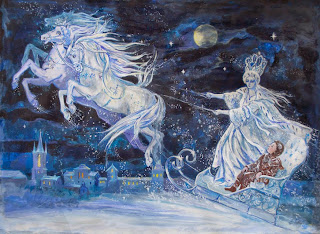 Kay is alone in the ice palace, the Snow Queen having gone to some distant mountains to make it snow there. Kay doesn't remember Gerda, but her tears for him wash away the piece of mirror from his eye, and... I dunno, the warmth of her love melts the piece of mirror in his heart or something, and they return to the village, grown up and now in love.

Naturally, Disney's movie has nothing to do with the original story.

Hans Christian Anderson's "The Snow Queen" doesn't give any meaning to who the snow queen is, or why she's the snow queen, or what it has to do with imprisoning Kay. What did the mirror have to do with anything? What purpose did it serve? Did the mirror give her power over Kay which she wouldn't otherwise have? Wasn't being queen of the snow enough? Most likely this was multiple, traditional stories that got smushed together over the generations, so now it's just a mess of details that don't add up. It is refreshing to see a girl embarking on a journey to save a boy who has been kidnapped, but otherwise the story doesn't stand out much. I suppose you can read many meanings into it, but I'm not going to.


*
I was hoping the movie would fill in the gaps of the original story and provide an answer for who the snow queen is, why she's the queen, why she has this power, but it doesn't! It should have! That was interesting! Its many ideas and subplots are not developed fully, so the movie is just a mashup of half-done concepts.

Maybe I'm being too hard on the Disney film. The Lion King and The Little Mermaid don't exactly hold up to scrutiny either, and don't get me started on The Fox and the Hound again. Is it really that different from what Disney has put out in the past? No, it isn't. It's standard Disney, and it happened to succeed.

There was a good story in Frozen, but it's still buried in the ice. It tries to tell us it's about finding the meaning of true love, but it clearly doesn't want to be about that. Whatever moral or insight it had into the subject comes across as sappy and contrived. The movie wanted to be about Elsa and her struggle to understand and control her power. It wanted to be an origin story to the Snow Queen. That's what I wanted to see, not a vague journey to discover the meaning of love.
Labels: Frozen review seek the original