Three children, Carey, Charles, and Paul, are sent to the country to live with their aunt while their mother is doing something so important she can't look after them.

The children meet Miss Price, an elderly woman in town who has a secret. Charles, the eldest, has been watching Miss Price fly on a broom for weeks. One night she falls and hurts her ankle, and the children rush to help her. That's when Charles confronts her about witchcraft. 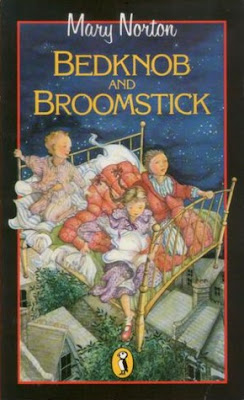 Miss Price is teaching herself the craft, and though she is a beginner, she can still do some impressive things. But she can't have the whole village knowing she's doing this, so she makes a pact with the children: she gives them a magical device that can transport them anywhere they want, at any time, in return for their silence. If they tell anyone Miss Price's secret, the spell will break and the object won't work.

Paul, the youngest, happens to have a knob from his bed frame with him. Miss Price enchants it, and now the children go off on wild adventures on their magic bed that can take them anywhere they want!

What's the first place they go? Back to London to see their mother. She's away, and instead they are picked up by a police officer and have a couple chapters in a police station, followed by a one-paragraph dilemma of how to get back to the bed.

Then they travel with Miss Price to a Pacific island for a lovely evening on a tropical beach (since beaches in England are cold and dreary). The island is inhabited by stereotypical cannibals (bones through the nose, dancing around a fire, chanting, a witchdoctor--every Hollywood cliché you can think of), and they make their escape. The children return home, bed soaked with seawater and pajamas filthy. It's enough to make their aunt send the children home.

This begins the second book. The bed-knob and magic have been forgotten for 2 years, and then the children answer Miss Price's ad in the paper for lodgers. Miss Price has given up magic, but she now owns Paul's old bed, and the children ask to go on one last adventure.

Finally, at long last, the children go somewhere interesting: 1666 England! There they meet a man who is pretending to be a necromancer for money, and they are so taken by his story of a life of fraud in fortunetelling and casting fake charms that they take him to present day 1940's England to meet Miss Price.

But when they send him back home, they discover he is doomed to be burned at the stake for sorcery! Now it's up to Miss Price and the children to rescue him.

What a waste of a magical object! British children in the 1940's had no imagination! They're in possession of a magical device that can take them anywhere, any time, and they don't do anything with it! The first book is disappointing. Escaping from cannibals? That's the story? That's all they do with the magic bed, and then for two years they do nothing with the knob?

It's only in the second book that they go somewhere interesting and do something interesting for someone who you kinda feel for. The necromancer is built up to be a very sympathetic character, worth going back to the past to rescue. Afterwards, the adventures end with no possibility for a third book. Two whole books, and they barely do anything with the bed-knob, or witchcraft in general.

It's not a bad pair of books; they read very well and Miss Price and the children are active characters who drive the story forward instead of just getting lucky (I'm looking at you, Miss Bianca, Nils, Bernard!), but the entire story is so underwritten it borders on making me angry for all its unused potential.

As the spiritual successor to Mary Poppins, the 1971 movie adaptation is quite a followup. Aside from the concept, there's barely anything from the books in the movie. The movie is actually an improvement.

Miss Price and the children use the magic bed-knob to go on a quest to find the last spell Miss Price needs to learn, and then she uses this magic for a real purpose: stopping the Nazis from invading Great Britain! It's exactly what was missing from the books!

Perhaps my expectations are higher in 2015 and the books were written when adventure could be more understated, but that didn't stop Treasure Island from being full of action and danger in the 1880's! I think so much more could have been done with the idea, and the movie did everything the books did not. It has adventure, character development, danger, humor, and the magic is used for a purpose. Overall, it is the better story, and one of my favorite movies from my childhood. It's still a spectacle to this day.
Labels: Bedknobs and Broomsticks Mary Poppins review seek the original