What I'm Really Afraid of...

Of late, I remember as a child being terrified of losing my imagination. That someday I would lose my ability to be so imaginative, and then what would I be? Who would I be?

As a child, I seemed to be self-aware of how imaginative I was, though I can’t remember why I thought this. Don’t all children have active imaginations? All the kids I associated with did, but I knew some kids who did not.

Why was I so afraid of that? I had wrapped my entire identity up in this idea that I was somehow more imaginative than the average kid, and if I ever lost that, I wouldn’t be me anymore.

What made me so afraid of losing it? Why did I think it was something that could be lost? Was I afraid of becoming that kid in art class who drew a Nike swoosh as an island because a corporate logo was where his imagination was supposed to be?

Is that what’s going on now? Am I resisting going to college and taking on a career because I am still holding onto my imagination as as the only thing that is myself? What, then, is the imagination to me? This sense of self-identity. This idea of who I am. What else is there to be?

If I ever did lose my imagination, who would I be? Have I met this person before? Perhaps I have, in a way. My mother often told me she regretted not pursuing singing. She said she used to have a good voice, but she didn’t use it, so she lost it. She used to write poems and short stories, but she never sought publishing, so nothing much became of it. She blamed my father for not encouraging her and belittling everything she did; he told me he tried to get her to publish things but she was the one who didn’t think her stuff was worth it. I don’t know exactly what happened, but i do know she lost a lot of herself raising my sister by herself, and then me with my father. Maybe as a kid I knew all of this, and I was afraid of it happening to me. If you don’t use it, you will lose it, and then you will lose yourself... just like mom did.

Yet at the same time I also feel that doing what I do, being so imaginative, is just a waste of time and I really need to get with it and think of my future. 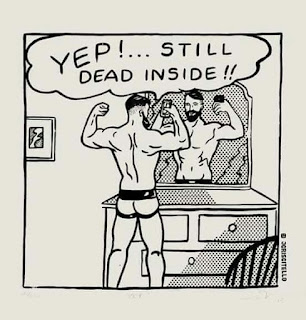 I feel like I haven’t been awake at all so far this year. I’ve gone the entire time completely trapped inside my own head. March is almost over, and I haven’t done a single thing. Soon I will have something to show for all the work I’ve done. Soon.
Labels: writing