My twentieth (20th) anniversary with [retail] has come and gone. Seems like last month I was worried about hitting my ten-year. Another decade has gone by. Over thirty job applications elsewhere and two interviews that went nowhere. Holy fuck. 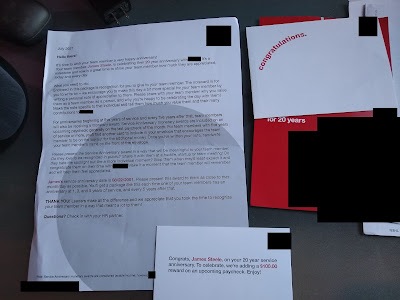 Last month I saw a note on my boss’s desk. I opened it. It was for my boss’s boss, and it was a paper outlining how best to recognize me on my twenty year anniversary. [Retail] gave my manager a script and ideas for how to recognize me. He couldn’t be bothered to follow through with the script. He just left it on my supervisor’s desk, and I found it.

I didn’t want a big party or anything, but finding out my boss got a script from corporate for how to proceed with this is just nauseating. Rather than recognize me, or hell, even just bothering to talk to me about what [retail] was like twenty years ago, he just left the script on my boss’s desk.

My father was wrong. Loyalty is not valued. Nobody cares.

I’ve been told that the 5-year plan to reorganize the company has been a failure, so [retail] is gradually moving back to the way things were done before. Holy fuck, five years the company spent reorganizing us for “modernization” and now it’s just a failure and we’re supposed to go back?

Twenty fucking years, and my reward is an extra $100 bonus combined with getting to see the script my boss was to follow but didn’t bother so he left it with a subordinate who just set it on the desk for me to find. I didn’t want a big party of anything, but I would think someone would be interested in knowing what this company was like 20 years ago. All the policies I’ve seen come and go. The changes we were told to get excited for only to be told to forget those changes let’s go back to the way we did things before.

*
*
*
So why am I here? It’s not as if I hadn’t put in job applications elsewhere. More than thirty. Two interviews in that time, both of which went nowhere.

[Retail] gives me ample time to write. Partnering with roommates and keeping my debt as low as possible has allowed me to survive and pursue things I desire. Things I was told were lucrative but have not paid off financially.

Follow your passion. Pursue your dreams. Nobody told me I’d condemn myself to a life of insecurity and poverty. It’s obvious now. What sense does it make to force our kids to choose a life path before they’re out of high school? Had I known then what I know now, I might have done some things differently. For a start, I would not have counted on my father’s advice that employers value loyalty and dedication and initiative. In our corporate-dominated world, that’s no longer true. Employers want interchangeable parts. They do not want loyalty. Loyal employees want things like health benefits and good wages and such, all of which cut into shareholder value and executive bonuses. Maybe if my father hadn’t divorced my mother just as I finished high school and derailed my plans to pursue computer programming as a career, I’d be singing a different song right now.
Right now, all I can think of is that my boss got a script for how best to recognize me. There was a time when your boss would have known this because he/she/they would have been around for just as a long. Now it is all corporate directed. My bosses have no mind of their own. They are outright told what to think and how to act. Conservatives would balk at this if it were coming from the government, but since it comes from a private company, this is perfectly fine and not dystopian at all.
Labels: life